Pinehouse heads toward self-determination with guidance of Elders, new role in industry

The Northern Village of Pinehouse is a text book example of the harm of colonialism on Aboriginal people and how becoming self determining can turn those communities around. From humble beginnings in the early 1900s, when a collective of Aboriginal families along the Churchill River started to live a communal and traditional life at what was known as "Snake Lake," to a community shattered by alcohol, Pinehouse has now grown to a thriving community of 1500 that has hope and a prosperous future.

As part of their rejuvenation, the community recently hosted their 5th Annual Northern Elders Gathering. Along with daily activities including smoking fish, birch bark biting, storytelling and nightly entertainment, Mayor Mike Natomagan took the opportunity to relate the history of the community to their guests.

In the 1970s, alcoholism became a major issue, so much so that parents took extreme steps to protect their children.

"We had 31 kids in care of the government and we were at a population of 500 at the time," said Mayor Mike Natomagan at the Elders Gathering. "Speaking to elders, that number was an understatement. We didn't have a road here. When planes came, some of the elders would go to the plane to meet social services to try and get their kids out for safe keeping. It is a bad history for us, but at the same time we are not going to be shy about it. We need to grow from it and learn from it and not keep doing the same things. Alcohol is a deadly disease for a lot of communities when you have hopelessness."

The town was facing challenges of physical and economic isolation, loss of culture, external governance, poor housing and sanitation and limited access to education and job opportunities. The alcohol problem drew the attention of the media. The people received a slap in the face in the late 1970's after CBC's The Fifth Estate did an expose on the community called the Dry Road Back. It was an unflattering portrayal of alcoholism and poverty and they deemed Pinehouse the "Drinking capital of Northern Saskatchewan." It was followed by a Regina Leader Post article calling it the saddest place in the north.

Watching the documentary with Mayor Natomagan is fascinating. His commentary is chilling.

"That person is dead from alcoholism. That person is in the pen," he points out as the camera shows the people and himself in rough houses, being fed bannock as their main food. Natomagan, who was raised by his grandparents on their trap line, used to make a raft and go live on an island with his friends during the summer and fish and hunt birds.

"It was about survival. People in our village were spending $250,000 a year at the liquor store in La Ronge. Seeing ourselves in this way on the documentary was the turning point for our community.

"We started rebuilding our community and used local governance, the Kineepik Métis Local was created, health services and education became available and finally sanitation," said Natomagan. The turning point also coincided with the development of mines in the north. "The uranium industry has certainly helped with changing our future. I worked for Cameco for 12 years, both at Key Lake and MacArthur. When the community voted me in at a by-election as Mayor I wondered why the community wasn't taking advantage of the industry here. We should be part of it. We should be creating wealth for the well being of our community."

The connection of the town to the uranium industry has led to controversy that has put undue pressure on the towns meagre resources. In 2012 the Northern Village of Pinehouse and the Kineepik Métis Local singed a collaboration agreement with Cameco and Areva to improve environmental stewardship, secure business, and provide employment and training opportunities to the community. The Agreement could mean around $200 million in economic benefits for the people of Pinehouse in the next ten years.

Anti-uranium folk have spoken out against the agreement and have even gone so far that over 30 people have sued the parties of the collaboration agreement to have it overturned. But a vast majority of those people are not from the community.

"The two individuals that are leading the chaos from the town against me and our growth, they both ran against me at the last election. I won over 85% of the votes," said Natomagan. "It all started with the NWMO when we signed onto the process to learn about nuclear waste. It then spilled over when we signed the agreement. The industry has been here since 1980 and we never took advantage of anything for our community. We have had people here that wanted to stop uranium mining, but since then they have built five mines.  Our community really depends on that.  We have over 250 people directly impacted in the industry and we can't have them stop working and come home to welfare."

Mayor Natomagan and the Village are also facing a freedom of information challenge by the anti-nuclear magazine Briarpatch.

"The things they are asking for are ridiculous. For example they want every email and phone call I have received from Cameco since 2007," said Natomagan. "I have trouble finding emails from last week."

So far the litigation on the Collaboration Agreement and time commitment to the access to information actions has cost the Village $100,000 with no end in sight.

"How do we deal with it? We keep going. We have 750 kids under age 19. We need to be doing something to get ready for these kids coming up," added Natomagan.

The predominately Cree speaking community has seen lots of positive change in the last decade. There is new housing stock, a co-op food store; there is a new rink and community centre, plans for a golf course and hotel, a high school with a new outdoor track and an improving bottom line of graduates. Employment is up and there is hope.

"The community improved through working together," said Elder Yvonne Maurice who is an Elder at the school and is a fixture at community events with her camera. "I know how hard poverty is with no electricity or water. And when I was a child, education wasnt important. Now we have so many children in school and there are a lot of young people that work now and are taking training. It wasn't like this before. I think the impact of the agreement has been good.  I have a grandson in training." 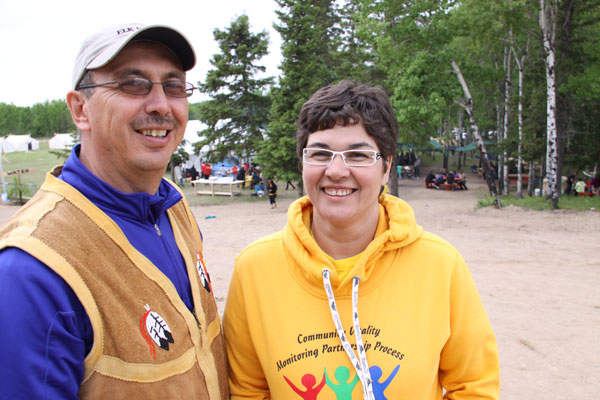 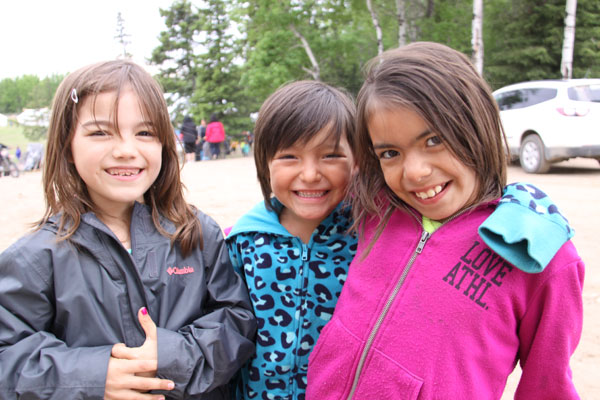 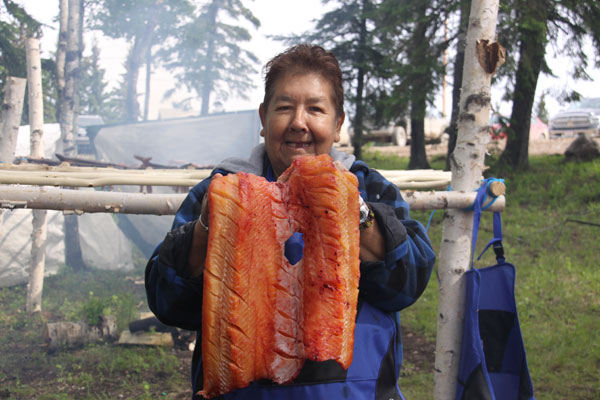 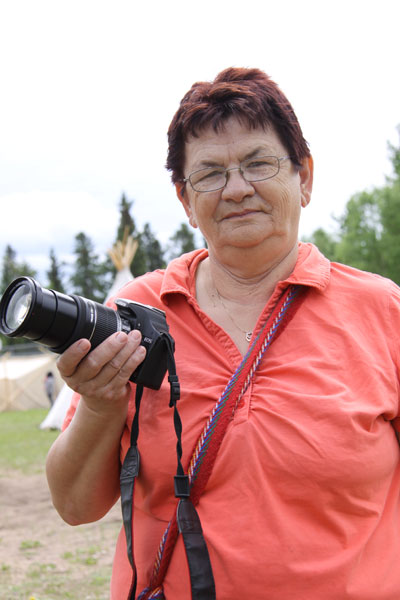 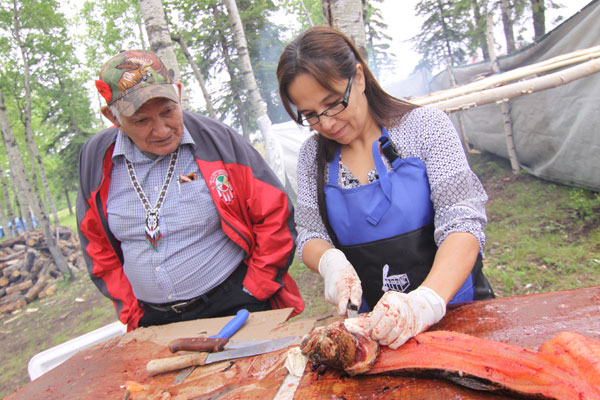 For more photos from the Pinehouse Elders Gathering, check out our Photo Gallery.

To better unify the community, a strategy was created. Community resources meet monthly at Reclaiming Our Community meetings where they trouble shoot issues and present solutions. There are also weekly intervention meetings with groups from social services and the school that Elder Yvonne attends.

Events like the Elders gathering bring together the entire community to act as hosts to all their northern neighbours. The event is about sharing and helping each other.

"We learn from other communities how you do things. Like watching people cut fish today," said Elder Yvonne who is also a very talented wildlife photographer. "Patuanak cutting style is really good, Stanley Mission is really good, too. But they do it different. I learned in Patuanak. But in the end, it all tasted the same! Seeing people make birch bark biting and weaving. The young people learn and the elders learn. Putting up the teepees this morning, everyone helped. The young people, they get really excited when we start to get ready. Everyone helps out each other."

Hundreds enjoyed the hospitality of the Pinehouse hosts over the course of the five-day Elders Gathering. Mayor Mike Natomagan took full advantage of the opportunity to sit with the Elders as well.

"My highlight is meeting different elders from different communities and getting advice," said Natomagan. "This morning I talked to an elder from La Ronge who is 86-years-old. He said, 'You guys never had anything. Now seeing you are rich. You got it made. I see you working together and just turn it around.'  That is the message we are sending to the kids. By uniting and working together you can make a difference. At the same time they are learning respect and serving the elders. I don't think you can ever go wrong with that."

The hard work continues for the Village of Pinehouse and for Natomagan. But he is confident his people are on the right track despite the challenges.

"My community is a blessing. As one of the leaders, the difference that we see today compared to growing up, I am very proud of the community for making a difference by uniting. This is what we talked about when we started the elders gathering. I know we are spending a lot of money to make this happen. But it creates unity. Unity of thought brings us together," said Mayor Natomagan. "The challenge is keeping the vision going and the goals. Keep uniting people with common vision. Seeing a bit of results keeps us going. We want to show the whole north it can be done. If there is a will, anything can happen."