A desire to serve the people launched a political career 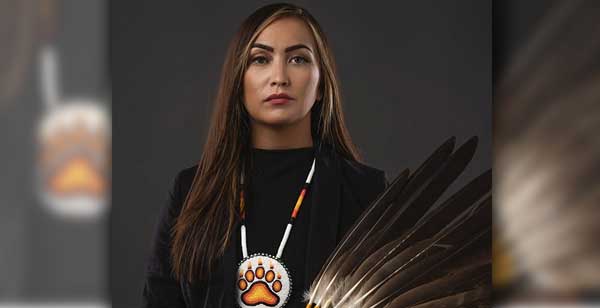 John Mayer may sing the line “it’s hard to beat the system when we’re standing at a distance, so we keep on waiting for the world to change” but the Federation of Sovereign Indigenous Nations (FSIN)’ Third Vice-Chief Aly Bear is not waiting.

Originally, Bear decided the best way to enforce change was to go to law school.

“I was looking at those who came before me and thinking about how I could best create positive change in this world where there has been a lot of injustice for our people,” said Bear. “I found that (law) was the route to take if I wanted to fight for justice for our people, and to understand how to help others navigate this world.”

She said she felt a responsibility to serve the people and that has been her focus.

Bear completed law school and specialized in Indigenous law. The year she completed her law degree, the FSIN postponed elections by one year due to Covid-19.

Bear is also well versed in politics and was approached by many people who asked if she would run in the FSIN election. “It was perfect timing,” said Bear.

This twist of fate would lead to her new role as FSIN’s Third Vice-Chief.

“I was in shock,” said Bear, who at the time was surrounded by friends and family in her home community, when she got the news. “While I was being hugged, my seven-year-old daughter went and wrote a note for me on a napkin,” continued Bear. “She gave it to me and that was what made me break down in that moment.”

For Bear, there are many things she hopes to accomplish while in office. Her portfolio spans education and the First Nations Women’s Commission, among others.

With the women’s lodge that is already in the works in Saskatoon, Bear hopes to create access to justice for women and two-spirited people. She also hopes to have a women’s tribunal through the lodge.

Bear wants to use her tenure in this position to advocate for, uplift, and find more funding for land-based education, language revitalization, and full-immersion schools.

“The youth and the women are who I am advocating for,” said Bear. “As a young Indigenous woman and mother, I understand the struggles and barriers that we face in society to try and become successful and taken seriously, and to sit at tables where our voices matter,” said Bear. “That has a lot (to do) with me wanting to continue to advocate for women especially.”

She wants to show younger generations they can accomplish anything they put their minds to.

“I want our younger people to know they are loved and to love themselves,” said Bear.

“There is hope and there are brighter days ahead. No matter what situation they are going through, we are human. We can learn from our mistakes,” she continued.