A story of a harsh and brutal reality 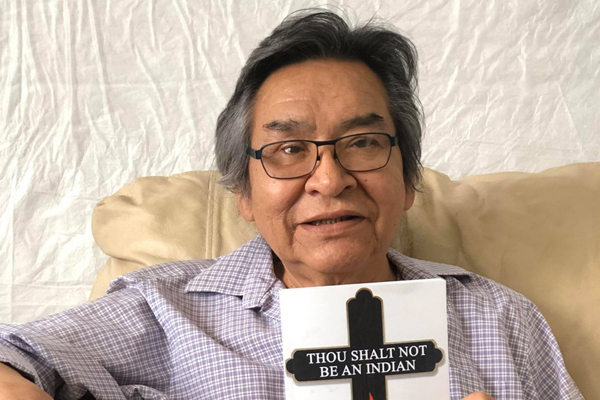 Robert Kakakaway with his book “Thou Shalt Not Be An Indian: A Residential School Survivor’s Story.” Photo supplied

Robert Kakakaway’s memoir “Thou Shalt Not Be An Indian” about his experiences at Marieval Indian Residential School during the 1960s was published by EagleSpeaker.com. For survivors, it is his story but our story as well.

He poignantly described idyllic life at home with his parents, siblings and grandparents. They were a happy farm family working and living on the land. Approaching school age, he knew he had no choice but to face residential school like the generation before him. He stated, “I’d never heard of hell, but I was about to find out where it was located”.

Next, he is alone and a number; followed by years of unbearable loneliness. He recounted the dull, monotonous routine that somehow reinforced lateral violence; disobedience meant harsh punishment. Being different singled boys out for different treatment. Emotions and expressions such as a child crying at night or laughing in the classroom were forbidden. There was no interaction with the opposite sex. What started cold and clinical over time became harsh and even brutal.

He has touching memories of “Gramma Smoker” who cared for the youngest boys nightly in the “small dorm”. We felt safe and loved being with her.

Parental visits were allowed on Sundays for two hours in the afternoon in the “front parlour.” Anxious boys were disappointed as many parents never came. Loneliness was endless. Precious times at home during holidays was followed by the awful sense of returning to the residence.

He described daily interactions with his brothers, other boys, teachers and staff. Although we learned lateral violence from caregivers, we also could not survive without camaraderie among fellows. Resultant trauma became routine and accepted natural order of life. For most, our homes, families’ and communities never again played a positive part of our lives.

The book is an easy read for the public and can be readily incorporated into any school curriculum. For survivors, the memories Robert’s story evokes are both heartbreaking and heartwarming. In short, it can be a difficult and painful read. It is a story of a generation lost, who struggled, and survived to tell the story.

An interesting historical footnote: a report was issued by the Canadian Welfare Council in 1967. It was based on a “Research Study of the Child Care Programs of Nine Residential Schools in Saskatchewan” (Online PDF). Both Robert and I composed the student group interviewed at Marieval by George Caldwell the onsite researcher. Some findings were that parents were losing the ability to care for children given the extended periods of separation; combined with this practice ongoing for the past two or three generations; students are going to have trouble adjusting to life outside the reserve; and they are not equipped to handle the struggle. Caldwell recommended that the Catholic Church stop managing schools altogether; the federal government stop delivering education on-reserve; and allow for community self-government. Soon thereafter, Indian Control of Indian Education became federal government policy. Marieval residence was demolished in 1998.