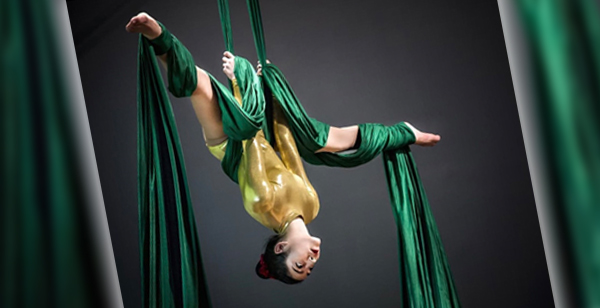 “What caught me about the aerial artists was how free they looked… It was kind of mesmerizing watching them fly through the air ... ” Photo submitted

Mercedes Sinclair was 10 when she became enthralled by the artistic athletes of Cirque du Soleil performing at SaskTel Centre.

“What caught me about the aerial artists was how free they looked… It was kind of mesmerizing watching them fly through the air,” she said.

Sinclair has always loved climbing high. When she was little, it was on trees at Pike Lake that she climbed until she could see the surrounding fields and farm houses, and then it was to the top of the rock-climbing walls at the university and downtown, where she clambered to the ceiling and tried to grip the upside-down holds.

By the time she saw the aerial artists, she was already climbing the walls at home, where her mother, Raven Sinclair, had installed hand grips in the living room that led to monkey bars in the archway for her to play on.

That summer, she went to the aerial camp at Move and Soar, a fitness business in Market Mall that featured the free-hanging silks, looped slings and “lyre” or hoop apparatus of the aerial classes offered by Yuki Block, who had trained in the U.S. with circus artists.

Block moved her business to Preston Avenue in 2018 and built up a dedicated community of mostly female athletes, said Anastasia Van der Most, a long-time student, then instructor, who, along with Romi Oqendo and Kaity Weichel, bought the renamed Fly Studios YXE in 2020 when Block moved to Nashville.

The three instructors had learned from her and other experts she brought in to give workshops over the years, or from classes they took elsewhere.

Sinclair, now 16, has been a regular student at the studio for six years.

She loved the new ways to play, climbing up the lengths of fabric attached at the 24-foot ceiling and learning to wrap her feet and legs in ways that allowed her to do movements while suspended above the floor.

She found there’s a world of difference between climbing solid surfaces and wrapping oneself in hanging fabric.

Achieving the flexibility to do many of the tricks and poses took years of dedicated practice.

“It kind of made me mad because I’m one of those people who don’t like doing things unless I’m good at them right off the bat,” she said.

“I was so ready to be a Cirque du Soleil performer until I (realized), as a beginner you definitely do not learn that. You go on beginner things, basics of moves, the transitions into moves, the foundations.

A year and a half into training, she started taking gymnastics, where stretching, walk-overs and balance beam increased her flexibility while building core strength, helping her feel her centre of gravity and learning where her “body was in space,” she said.

As much as she loves the activity, Sinclair no longer wants to join Cirque du Soleil and will likely be a writer, she said.

Van der Most says Sinclair brings a determination to learn everything that comes at her, often practicing on her own for hours.

“She has a style like nobody else. The first time I saw her do a “star” movement… she had her way she did it, which was to flow. It made it look so different and it looked amazing. It’s beautiful… It’s poetry watching her move.”

The business is moving to a new space on Millar Avenue in the north end, where an engineer has been consulted and trained theatre riggers are installing the hardware that holds the hanging apparatus according to circus industry standards. For information about classes, check out Fly Studios YXE on Facebook, Instagram.