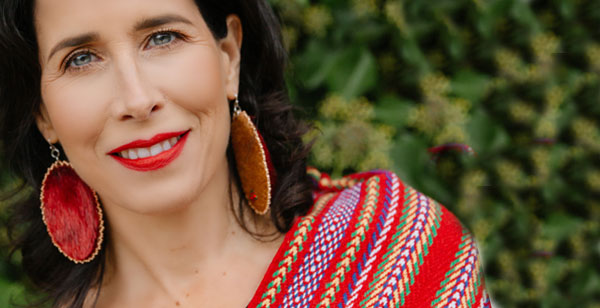 Andrea Menard will perform her show Rubaboo with the Regina Symphony, November 26-28. Photo by Lulia Agnew

Métis musician, song-keeper, and actress Andrea Menard is breaking into new territory – territory that is traditionally colonial and reserved for more high-brow artistry. And Menard is perhaps the first Metis individual to do so: “I am the first Métis person in Canada, as far as I know, and perhaps North America, or even the world, to do a full 'pops' symphony. This is a big deal!,” Menard told Eagle Feather News.

On November 26-28 at the Holy Rosary Cathedral in Regina, Menard will be performing 'pops' concert with the Regina symphony orchestra. A 'pops' concert is an orchestra that plays popular music rather than the typical classical symphony works, which are often considered less accessible to the general public. This will be the second time Menard has orchestrated her music, the first being in 2014.

The upcoming concerts are titled Rubaboo, the Michif word for 'stew' or 'big pot'.

“This is a musical feast of my Métis culture, but also songs of Reconciliation, songs of unity, love songs, jazz songs, and also leftover feelings of frustration at the fact that so many Canadians still don't know our history,” she said.

Menard has long worked to increase education and awareness about Métis and Indigenous history and culture. In addition to being a five-time Gemini nominated actress, star of the APTN/Netflix series Blackstone, Menard is also the founder of the Sacred Feminine Learning Lodge, which offers resources like workshops and sacred circles to people of all genders to find a more balanced life.

“I'm known for being proud of my Métis heritage. I'm very determined to help educate my audiences as well as create a safe place for people to learn things they didn't know. As a storyteller, song-keeper, and songwriter, I want to make it accessible for people to learn. This is something I'm passionate about.”

In Rubaboo, Menard has songs about Residential schools, Missing and Murdered Indigenous Women and Girls, and her personal experience with sexual violence, to name a few.  She said she wants to use her voice to help open people's minds and hearts to learn, which in turn makes herself vulnerable to the emotions that come with such heavy subjects.

“The writing and creating is the time when the emotions are the freshest. Every time I perform it, it may not be quite as raw as the fist time, but I'm definitely open. My prayer is that I become a conduit for healing and teaching. I have to open up so my body, my voice, my heart can act as that emotion so I can transfer it to the audience,” she said.

Due to COVID-19 restrictions, the orchestra playing with Menard will feature around twenty musicians, rather than the usual fifty, and shows will be small and intimate, she said, with a capacity of fifty audience members.

But she has a feeling that this show will be a bit of a breakthrough, and will travel widely. She has already been approached by the Toronto Symphony Orchestra to perform Rubaboo in a virtual concert.

“It's a platform not traditionally open to Indigenous people. Of course, I had to get my music orchestrated so it could fit into that platform, but I want to use whatever platform is available to take up space and bridge, create conversation, throw away stereotypes, and dismantle systems that have disregarded Indigenous people,” said Menard. “And for people who have never seen us in that type of space, to open the door to say 'wow we're talented. We have so many talents.”