Batoche hosts final ceremony of Walking With Our Sisters exhibit

In its final ceremony, the Walking With Our Sisters commemorative art installation has seen its last year, ending in Batoche. From August 15 to 18, more than 2000 vamps were displayed amongst a path to honour missing and murdered Indigenous women and girls (MMIWG).

The River Women Collective from St. Louis, Bellevue, Batoche, Hoey and One Arrow First Nation hosted the final exhibit and were honoured to organize a sacred ceremony that honours MMIWG. 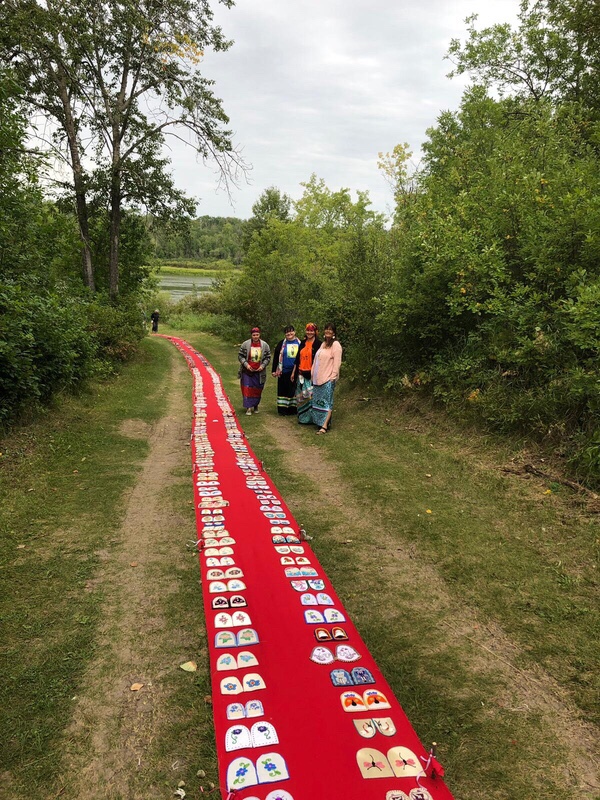 More than 2000 vamps were displayed on a path that stretched over 630 feet in Batoche’s East Village to honour Canada’s missing and murdered Indigenous women and girls. Photo credit: Angela Rancourt

Angela Rancourt, who is part of the River Women Collective, said the group of women have been organizing the exhibit for over a year to ensure it was a great success, as it’s the first time it will be held outdoors.

“Planning for an outdoor exhibit was a bit complicated a few things to consider such as weather. But we created a space for people to visit so the tent village is a nice addition for families [and visitors],” said Rancourt. “Having this final installation and honouring this bundle on this land is very special to us as River Women Collective because of the historical significance that this land has for our people.”

The tent village consisted of an elder’s tent, a visiting Metis local tent, a children’s tent, a two-spirited tent and a wellness and counselling support tent to accommodate the number of families and visitors.

Rancourt said they have received various responses from attendees who walked the path of the art installation.

“There are really no other events like this. It’s not a game, it’s about honouring our women and it’s about giving the families time to grieve and to come together to support each other,” said Rancourt.

Exhibit attendee from Ottawa Kara Louttit sits on the National Collective with the Walking With Our Sisters, and says her role was fuelled by a family tragedy. In 2007, Louttit’s sister passed away tragically where her death was ruled as a suicide but as evidence unfolded, her family started to believe that she was murdered.

Louttit struggled with her sister’s death where she turned to drugs and alcohol as a way of coping for years. Her healing journey began in 2013 where she found a community conversation for the Thunder Bay Walking With Our Sisters committee. Afterwards, she was asked to join the National Collective where she gives credit to her healing journey.

“This has changed my life completely around,” she said. “I’ve been incredibly honoured to join our sisters within this memorial.” 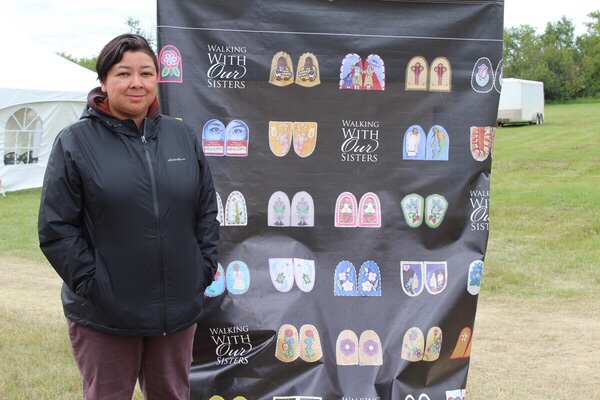 Kara Louttit from Ottawa sits on the National Collective of the Walking With Our Sisters, which was led by a family tragedy. She said joining the group has helped her heal and cope with her sister’s death. Photo by Jeanelle Mandes

Over the four days of the exhibit, organizers saw hundreds of visitors attend the art installation.

The path of vamps stretched over 630 feet which ended along the river where a tipi and a sacred fire were held. On the final day of the exhibit, the vamps will be collected and given back to the families or will be offered to the sacred fire as some families have requested.

The Walking With Our Sisters exhibit ended in its 7th year, which originally began from a call out on social media from Metis artist Christi Belcourt in 2012 for moccasin camps in honour of MMIWG.