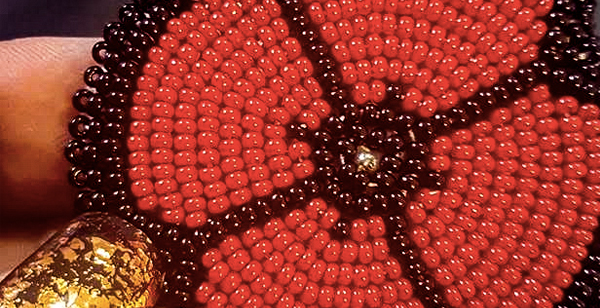 Patricia Worm wanted sales from her poppies to support the Saskatchewan First Nations Veterans Association and she insists customers buy a poppy from the Royal Canadian Legion too. Submitted by Patricia Worm

As Patricia Worm runs her family’s beadwork business, Dark Horse Creations, she draws on advice she got from her father.

Worm donates a portion of the proceeds from sales to the Saskatchewan First Nations Veterans Association (SFNVA).

“I thought one day, I should just make a beaded poppy like that. But I knew I didn’t want to take money from the veterans. So I said, okay, I’ll just give them a portion of mine.”

Worm does not want her art to detract from the Royal Canadian Legion, either - for every beaded poppy she sells in Saskatchewan or outside the province, she insists her customers buy one from the Legion as well.

“As long as the poppy lasts, you buy a poppy every year,” she said.

But Worm saw an opportunity to use her beaded poppies, which each take approximately four hours to make, to direct more support towards Indigenous veterans specifically.

“I wanted this to go and support our First Nations veterans because I know they didn’t get as much when they got back from the war… as the white soldiers that came back. I don’t even know if they all got a thank you.”

The veteran’s association publicly thanked her on their Facebook page, and veteran Keith Brass from Kawacatoose First Nation, who served as a Peacekeeper in Bosnia, is wearing one this year.

“He said, ‘I want one,’ but I couldn’t let him buy it off me, I just gave it to him,” Worm said. “He wanted to wear one because he thought they were so cool.”

In Worm’s household, beadwork is a family affair; she learned to bead from one of her daughters and enjoys the time they spend sitting at the table, talking and beading.

“It feels really good to learn from her. It makes me happy.”

“I feel proud,” she said. “There’s a lot of beading going on in my house, and we’re happy to do it for the veterans… We want to say that we appreciate them for what they did. They put their lives on the line for us, and this is our way of acknowledging that and giving back.”