Though they might seem like decorative sculptures, the wooden structures that will be appearing at the University of Saskatchewan campus and Wanuskewin Heritage Park in Saskatoon this spring are actually the buzziest new hotels in town. 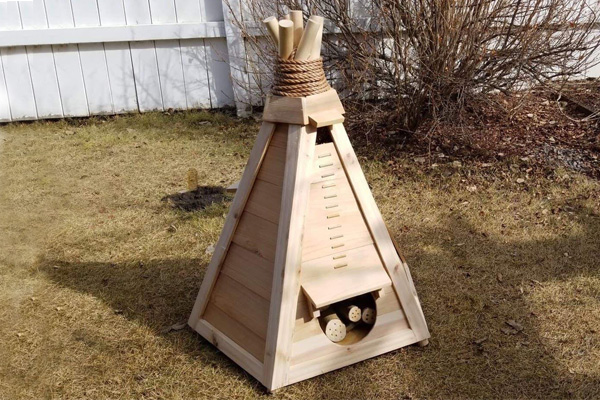 These ‘bee hotels,’ which will act as a shelter and resting place for the local bee population, were conceptualized by Annette Bellinger, Bryan Panasiuk and Cjardai Ulrich when they were students in the U of S’s ‘Sustainability in Action’ course. The hotels are being placed in areas full of plants native to Saskatchewan, which will allow the bees to thrive.

Dr. Colin Laroque, one of the professors for the course, thinks the project will help educate the public, since people may be inspired to learn about the importance of bees when they see these hotels.

“So many people – school groups, tourists – come to Wanuskewin Heritage Park, so it’s an area that people are coming to learn in anyways,” he said. “The bee hotel is a great mechanism to get to the people who are already caring about native and natural environments. I think it’s a wonderful way to teach the people who are ready to be taught.”

According to Bellinger, she and her groupmates were inspired to take this project on by the alarming statistics about these critical pollinators in Saskatchewan and across the world.

“Obviously, bees need to be conserved,” Bellinger said. “The bee population is on the decline, and everybody’s talking about it, it’s always in the news. So, we all came together and wanted to do something on bees.”

Panasiuk says that the bee hotels can help combat some of the specific threats facing bees in areas where there is a significant agricultural industry presence.

“A bit thing that’s happening across the prairies and in any agriculture is the use of pesticides and neonicotinoids, which have been affecting bees’ ability to reproduce queens, which leads to colony collapse,” he said. “These pesticides also affect their homing ability and the velocity and distance which they can fly. So, by putting up these hotels … it allows the bees to put their larvae in a place where, when they hatch, they can be born into a flourishing habitat.”

Bellinger hopes the project will not end with her team’s work because it could provide valuable data about the state of Saskatchewan’s bees, which would assist with conservation efforts.

“We’re hoping that our project gets picked up by a master’s student or a professor who could do some sort of research one what species are our bee hotels, and if there’s any pesticides or parasites or stuff like that,” she said.