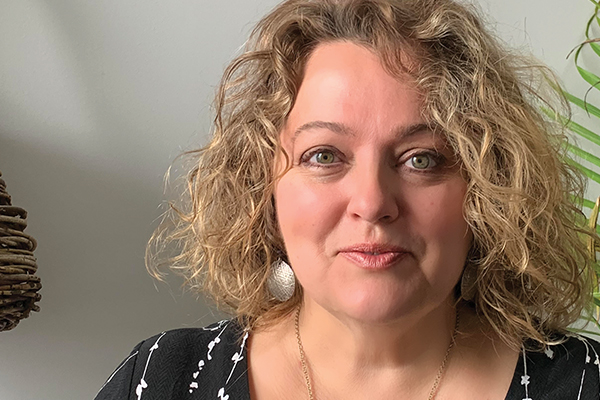 Janice Braden manages a research network in primary care at the UofS College of Medicine. Photo by Addison Braden

When Janice Braden thinks about her commitment to reconciliation, she goes back to her earliest memories.

“I grew up in rural Saskatchewan,” she said. “I was a farm kid and, early in my life, I had close friendships with Indigenous friends and got to know them and their families. I saw they were just like my family, but the world often didn’t treat them the same way.

“As I realized the world would often treat Indigenous people unfairly, I think it became a theme that this was part of the work of a lifetime for me.”

This commitment has carried through her life and career. From 1997 to 2000, she worked in Nunavut, launching a magazine for Nunavut Tunngavik Inc. Then she went to Ottawa to work as a senior policy analyst for Indian Affairs, where she worked on the processes leading up to the 2005 Kelowna Accord.

“(I saw) how often Indigenous people have stuck their neck out to trust and have faith in governments to be able to move forward on initiatives,” she recalled.

“That trust is a precious thing. And so, every time I read one of these things where the government hasn’t fully met its promises, I think, ‘governments come and go, but Indigenous groups have been seeing this record for a long time.’ We need to have greater respect for them.”

“When you’re working as an ally with an organization, you get to bring your skills and your knowledge to it, but you have to ensure that the lead and the vision is coming from Indigenous people,” she said.

“Time and again, it’s proven that Indigenous people have a stronger, better, bolder sense of what needs to be done… So that vision really has to be set by them.”

Morgan Hare, Executive Director at First Light Friendship Centre in Saint John’s, Newfoundland, is one of Braden’s longtime friends - they met in Ottawa, and he remembers her passion and drive.

“I find Janice is a very strong advocate of furthering Indigenous reconciliation across Canada,” he said. “Her keen interest remains to hold the Federal Government accountable for the injustices to Indigenous peoples.”

Since returning to Saskatchewan, Braden has worked for Métis electoral reform commission, as well as the original inter-sectoral commission in Saskatoon, which brought together leaders from different social-related agencies in the city.

“They hired me to examine what could be done to reduce poverty in Saskatoon,” she recalled. “And one project we took on was the plan to end homelessness. I worked with 20 different agencies in the city to create the Housing First initiative, which has been rolled out in several cities.”

She now manages a research network in primary care at the University of Saskatchewan College of Medicine.