Comedian aims to expand his audience 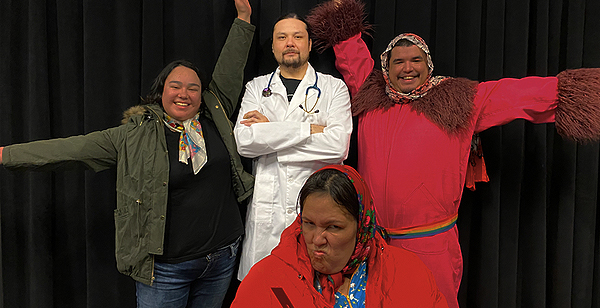 Comedian Shawn Cuthand was at The Broadway Theatre as part of this year’s Saskatoon Fringe Festival. Photo by Funny Bone Schmomedy Zone

After the last two years, everyone needs a good laugh and that’s exactly what Shawn Cuthand of Funny Bone Schmomedy Zone plans on doing.

He was one of the performers at this year’s Fringe Festival in Saskatoon.

Cuthand got into comedy four years ago after getting sober.

“I was looking for a creative outlet,” said Cuthand. “I discovered the open mic scene in Saskatoon and after the first time I went up I was hooked.”

His friend Danny Knight was also new to the comedy scene, so they decided to work together.

“We would sit on his balcony telling each other jokes deciding what to try on stage,” said Cuthand.

A year later Cuthand and Knight created an open mic called Funny Bone Schmomedy Zone with the goal of honing their craft.

“We needed to practise for longer gigs,” said Cuthand.

Last year was the first time Cuthand participated in Saskatoon’s Fringe Festival. Because of the Covid-19 travel restrictions it was only open to local artists.

“I thought my chances would be pretty good,” said Cuthand.

So, he filled out an application and was accepted.

This year, Cuthand was able to do his set at The Broadway Theatre, which seats up to 400 people.

“Last year, we were at the refinery, which could only have 30 seats and we sold out six shows,” he said.

To finally be on the stage was a dream come true because the larger venue is a real test of his talents as a performer.

Comedy was impacted by Covid-19, which made this year’s set even more special for Cuthand.

“Last year, it was the highlight of the summer,” said Cuthand. “We used to be able to do open mics three times a week, but now it’s once or twice every two weeks. So now getting to do the fringe we get to do a whole week of comedy. We don’t get to do that often so this is a big highlight for us.”

They called their show Look Ma, We’re On Broadway! and hoped to attract new visitors to the Fringe Festival. He said when most people think about the annual event, they often don’t think comedy shows would be part of it.

Cuthand said the shows are typically for mature audiences because of language and sexual content.