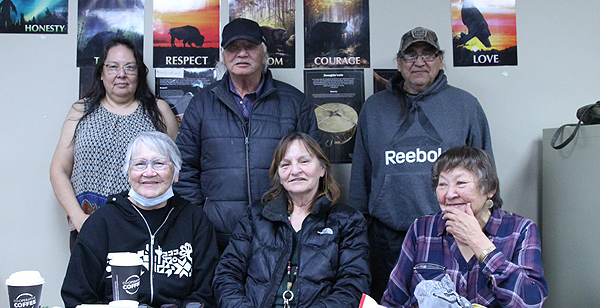 Faced with the reality of losing their most precious resource, Elders and Knowledge Keepers from Cote First Nation took matters into their own hands.

In the heart of southern Saskatchewan on Treaty 4 Territory, the Onakawawin language is becoming harder to hear in the conversations between Cote First Nation members.This loss of Onakwawin is because of colonization and Indian ResidentialSchools (IRS) and can be detrimental to the way of life and traditions of Saulteaux people.

“Without the language and without the culture, there can be no ceremony,” said Elder Wanda Cote. “You can’t perform the ceremonies in English. We’re trying to preserve the language to carry on our culture and our traditions. We’re given that language by the Creator to pass on to our children.”

Through the collaboration of community Elders and support from Yorkton Tribal Council, Kici Anishinabek Kananakachiwewat Community Service Co-operative was developed. By working together for the advancement of future generations, they are challenging the forces that tried to erase who they are as an Indigenous community.

The Elder-led co-op translates to “Elderly Knowledge Keepers Community Services Co-operative” and is based on the goals of the seven founding members. Elder Madeline Whitehawk is using the strength of her life experience as an IRS survivor and former educator of 50 years to empower the work the co-operative is creating.

“I was raised in the forest and I lived in harmony with nature. I speak the language fluently,” said Whitehawk. “I have a linguistics background, and throughout my years I’ve gained knowledge on curriculum development and language development.

“We often hear our leadership say we have to preserve our language, but nobody has really done anything. As Elders,we got together this summer, and asked, ‘Well, what can we do?’ We want to do something now.”

Each of the co-op members bring invaluable expertise to the group, including community service, traditional knowledge and culture preservation. The co-op will carry out traditional cultural and land-based activities, promote healthy and balanced lifestyles, and provide education about the Onakawawin language.

Starting a community-based co-operative can be another step toward self-determination and self-reliance for your community. Learn More about the benefits of the co-op model and how to get started on-Nation at yourwaytogether.ca.