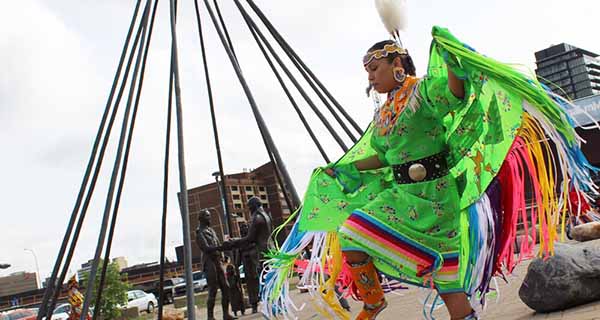 Due to COVID-19, festivities for National Indigenous Peoples Day across the province have moved to virtual celebrations this year where viewers can watch entertainment from home. EFN stock photo

The ongoing health ban on large gatherings means the RCMP won’t be handing out five-dollar bills this year and there won’t be a Rock Your Roots walk or other public gatherings on June 21.

Status First Nations people who don’t want to wait until next year for their Treaty money, can fill out a form on the Indigenous Services Canada website and have a cheque mailed to them.

This year the Saskatoon Indian and Metis Friendship Center (SIMFC) had to think outside the box for its National Indigenous People’s Day (NIPD) celebration. The event will be recorded and posted to its website www.simfc.ca on June 21.Sanford Strongarm Sr. will host the event with performances from Terri-Anne Strongarm, Krystal Peterson and Phil, Dallas and Mya Boyer, among others.

“Every year SIMFC has been proud to host NIPD celebrations,” said Robert Doucette Executive Director Saskatoon Indian Metis Friendship Center. “The last couple years we’ve been working with (the Office of the Treaty Commissioner’s) Rock Your Roots (walk) but this year is different because of the pandemic. We didn’t want to give up on NIPD.”

The event will also feature Indigenous facts throughout the two-hour event.
“People will realize that we’ve made great contributions to this country,” said Doucette. “Our people are now physicists, nurses, doctors, lawyers and teachers and we have played a significant role in the development of this country and we’re going to showcase that.”

Like many communities the City of Regina is postponing its NIPD celebrations. the event has been moved to September; the exact date is yet to be picked.

“We still felt it was very important to be able to provide some programming that would allow Individuals to understand the importance that Indigenous people in Canada have contributed over the years,” said Brad Bellegarde, Cultural diversity and Indigenous relations advisor for the City.

The City and Regina Public Library have partnered to provide Indigenous based events online for National Indigenous History month. You can find the content on Regina Pubic Library website in the Reconciliation tab. Content will be available for the month of June.

The online content includes a video on making bannock with Sioux chef Dickie Yuzicapi, Metis jigging, video screenings and talks with Indigenous Authors, including Waubgeshig Rice, author of Moon of the Crusted Snow.

“It’s a new way of providing co-learning for the Regina public Library and the City of Regina,” said Bellegarde. “We hope Regina residents will join in and help us celebrate by participating in these virtual programs.”