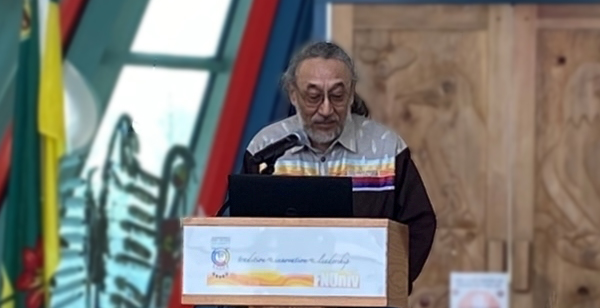 Solomon Ratt at the launch of his newest book in the atrium at First Nations University of Canada. Photo by Chance Deneyou

Solomon “Solsquatch” Ratt, a long-time Cree instructor, proved he’s a creature of habit by choosing to launch his latest book with an impromptu Cree lesson.

The book, aptly titled âhkami-Nêhiyawêtân: Let’s Keep Speaking Cree, is the culmination of years of work by the Cree language instructor, who is affectionately called Solsquatch by students because of his fascination with Saskquatch.

Rather than explain how it’s different from other text books he’s published, Ratt decided to show people by recruiting students to demonstrate.

Darian Agecoutay had a copy of the book on him so he was called on by Ratt.

The two bantered back and forth in Cree, sometimes they broke out in laughter. However, most people at the event didn’t know what was being said and that’s exactly why Ratt created the book and why Agecoutay chose to study Cree at FNUniv — to revive the language.

“It differs from other Cree textbooks in that it offers more than grammar explanations and word lists,” he said. “The book provides anecdotes, employing those grammar items and those words within a context of simple stories followed by questions about the stories.”

Agecoutay agrees and says the book is interactive yet fluid because there is no wrong answer. The only requirement is to answer in Cree.

Agecoutay has used that same approach in his own language journey, which began six short years ago when he was only 18.

His perseverance has paid off because he can read and write in Cree and hold Cree conversations with his teachers.

Initially, Agecoutay entered university to pursue a degree in environmental studies, but after his first Cree class he was hooked. Now a Cree sessional instructor at FNUniv, he doesn’t think he will ever leave because he’s dedicated to language preservation just like Ratt.

“The language found me, that’s what I always say,” said Agecoutay.

Unfortunately, only his great grandparents knew their language.

“We lost our language a long time ago, because of Residential School,” said Agecoutay, who is from the Cowessess First Nation.

The Marieval Indian Residential School operated from 1899 until 1997 on his reserve.

Ratt, a Residential School Survivor, was able to retain his language. He said teaching found him.

Ratt first entered university to pursue journalism, but was quickly recruited to teach Cree, which he’s been doing since the 1980s.

Back then, there were few Cree resources, which was frustrating.

So along with teaching, he’s written and published nine books.

Agecoutay is thankful for all the work Ratt has done to preserve the language because he doesn’t know what state the Cree language would be in if Ratt didn’t lay that foundation for learners like himself to follow.

âhkami-Nêhiyawêtân: Let’s Keep Speaking Cree, published by the University of Regina Press, is available at bookstores.