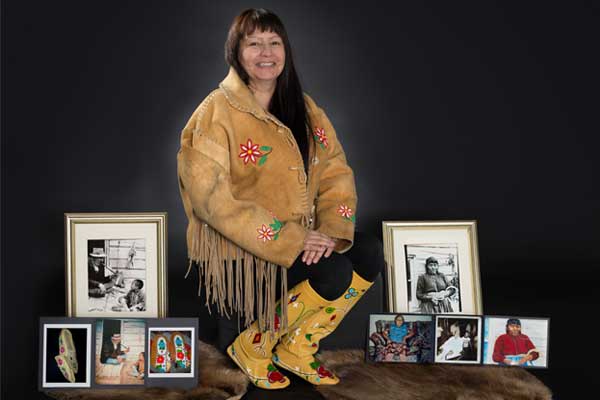 Linda LaVallee, owner of CreeNisga’a Clothing, with photos of her grandparents.

The great-granddaughter of a Cree man, who was forced from his traditional land when Prince Albert National Park was created, is reclaiming a place there with a new store selling Indigenous art products.

Linda LaVallee is excited to be returning to Waskesui Lake where her great-grandfather, Louis LaValley, lived 92 years ago. He, and other Indigenous people, were ordered to leave in 1927 when the Government of Canada chose a 3,874 square kilometer section of the Boreal forest for a new national park. LaVallee’s family is still fighting for the land or compensation.

Louis had cows and horses and his son was buried in the area.

“It was told to me by my dad, Joseph, who has since passed to never give up on that land that was taken from us,” Linda said.

Louis knew the English naturalist, Grey Owl, who talked about him in his books as the sage of Pelican Lake.

“Louis used to say Grey Owl was a white man trying to be something he wasn’t, which was native,” Linda said.

After requesting a store space in the resort for seven years, LaVallee and her husband, Patrick Reid Stewart, will finally open CreeNisga’a Clothing on Waskesui Drive on July 4, from noon to 4 p.m. Due to Covid-19, there will be safety measures in place.

Linda’s uncle, Jacob LaVallee, will join them for the opening.

“It’s a big thing for him, we’re actually going back. He’s quite excited to be involved. Jacob looks exactly like Louis LaVallee, their resemblance is uncanny,” she said.

The store will feature creations by LaVallee and her family. LaVallee sews and designs, her son Cory LaVallee does a blend of traditional and contemporary Cree artwork and Stewart’s art is based on traditional Nisga’a stories and cultural protocols.

The store will also sell clothing from thirteen Indigenous designers, including vests by Lyn Kay Peters, tops and ribbons skirts by Disa Tootoosis, purses and women's coats by Karl Harris. There will also be artwork from carver Mike Dangeli and Allen Morrow.

The all-Indigenous store will also sell traditional paintings, beadwork, moccasins, canoe paddle work, boots and fabric with beautiful designs. LaVallee would like to showcase and sell children's artwork at the store too.

“I just want to have a place for Indigenous artist and designers to come and showcase their stuff,” she said.

“I wanted it open for everyone. If you have artwork bring it on down ... There’s lots of Indigenous artists [who] don’t have anywhere to sell or to even let people view what they can do. I just want a place for them. Because I never had that opportunity, I want that opportunity for them.”

LaVallee is excited to bring an Indigenous presence back to Waskesiu and hopes Indigenous people will feel welcome in her store.

The new shop is an extension of the couple's on-line clothing store Creenisgaaclothing.com, which began in 2010 selling LaVallee’s traditional boots with her husband’s Nisga'a artwork designs on them and grew from there.

Their products are also shown on their Facebook page, Cree Nisga’a Clothing. They make custom boots and offer sole repairs for them when the bottoms wear out.

The store will be open until the September long weekend.