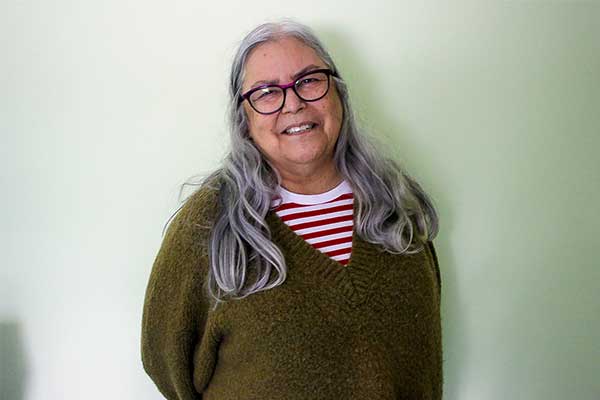 Pioneers of a particular field often fail to be properly appraised during their careers; it's not until enough time has passed that we begin to understand the influence of their work. Such might be the case for multi-disciplinary, Saskatchewan-based artist Ruth Cuthand.

Earlier this year, at a the Ziigimineshin Beading Symposium in Winnipeg, Cuthand was referred to as 'the Matriarch of Contemporary Indigenous Beading' for her innovative artworks using beads. In her series Trading, Cuthand has beaded 12 visual representations of viruses the European settlers brought to North America. The artworks are a visual reference to colonization and represent how settlers and trade impacted Indigenous life.

“I wanted to politicize the beads. I wanted to make them more than just a craft item, to move them from craft to fine arts, and present them in a more contemporary way,” Cuthand told Eagle Feather News.

“I started thinking when the bead arrived, as a trade good, how beading and women's art just exploded. Because they now had this material that was faster than quill work and they could express themselves more. I started thinking of trade, then the downside of trade, part of which was disease.”

Cuthand said she was immediately drawn to the abstract beauty of microscopic images of these 'new world' diseases. Once she started, she quickly piqued the attention of curators and galleries around the country. Her bead work has been exhibited across Canada, including showings in Montreal, Toronto, and, Saskatoon, and an artists' residency at the University of Saskatchewan.

“When I started doing it, I questioned how beautiful it was. Because if you bead a disease, it's gorgeous, but it's still a disease. So there's a push-pull to it,” she said.

Cuthand has long had a career of infusing her artwork with complex themes and challenging mainstream perspectives on colonialism and racism.

“Art allows me to make work about what's on my mind. It's a way of communicating with other people without hammering them over the head,” she said. “An idea will go around and around in my head. Once in a while, it will come forward, and I'll think on a basic level of what I want to do about it and how I can best express it.”

This February, Cuthand was awarded the prestigious Governor General's Award in Visual and Media Arts, which recognizes outstanding contributions to the arts in Canada. It was the first time she was nominated for the award, and as such, the honour was quite a surprise.

“I was told you usually don't get picked on the first try, so when we got the news, I was jumping up and down with my daughter,” she said.

Cuthand said her next venture is yet to be determined, but whatever it may be, her work will continue to push boundaries.

“The creative part inside me asks, 'how are you going to do this without doing what people have done before? What's new about this that I can bring to it?' Those are the questions I'm always asking myself.”