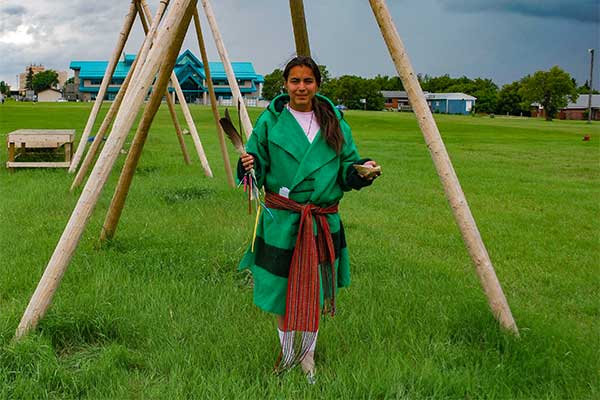 Tristen Durocher poses in front of the teepees at the Prince Albert Grand Council grounds on his way to Regina on July 10, 2020. Photo by Brendan Mayer.

Well known Métis fiddler Tristan Durocher is leading a walk from La Ronge to Regina to protest the Saskatchewan government’s defeat of a bill to respond to the staggering number of people who have lost their lives to suicide in the province.

According to the Saskatchewan Coroners Service, 2,338 people lost their lives to suicide from 2005 to 2019 in the province. Suicide is the leading cause of death in northern Saskatchewan for people ages 10 to 49. Durocher, who started the more than 600-kilometre journey on July 2, has played the fiddle at many funerals for suicide victims.

“We’re going to keep on breaking Canada’s heart with the realities of what’s happening to us until Canada’s heart opens and they care and they see that we’re not numbers,” Durocher said. “We’re not statistics. We have faces. We have names. We have voices that are missed that matter. Our whole country needs to see that. Let’s pray we open their eyes and that they actually do care and are horrified by what they see because it is what we’ve been living through for the past 150 years. Oh Canada, you can do better.”

Durocher asked on Facebook for families who have lost loved ones to suicide to send him their photos, so he can display them outside the legislature.

“Nobody should have to bury their child and it’s happening all the time. It’s an epidemic.”

Durocher intends to begin a hunger strike once he arrives at the legislature and will continue until the government passes meaningful suicide prevention legislation. He was compelled to act when the provincial government defeated a suicide prevention bill on June 18. The Saskatchewan Strategy for Suicide Prevention Act was created by Cumberland NDP MLA Doyle Vermette.

“That bill wanted to legislate some accountability,” Durocher added. The response, “was a unanimous ‘No thanks, we’d love to continue to do nothing.’ That was the last straw.”

Durocher is walking with Lac La Ronge Indian Band member and Men of the North founder Christopher Merasty and other supporters. Merasty said he was inspired by Durocher and didn’t hesitate when asked to join the walk.

“Someone in my family attempted suicide a couple of years ago. We had to travel far and wide to find the treatment that they needed,” Merasty said. “Why can’t we have something for our youth in northern Saskatchewan and keep them in the community? We don’t need to send them to some community they have no idea about. They’re not going to get anything out of it.”

Durocher says the government’s rejection of the bill leaves its own suicide prevention plan without any legislative backing for implementation. Saskatchewan’s Rural and Remote Health Minister, Warren Kaeding, released Pillars for Life: The Saskatchewan Suicide Prevention Plan in May to guide suicide prevention initiatives in the province.

“Pillars for Life is not a piece of legislation,” Durocher said. “The government did not want to legislate any accountability for themselves.”