Tenille Campbell’s “Indian Love Poems” have been making the rounds for well over a year — in her first poetry book she explores love, lust, language, and colonial/decolonial relationships. 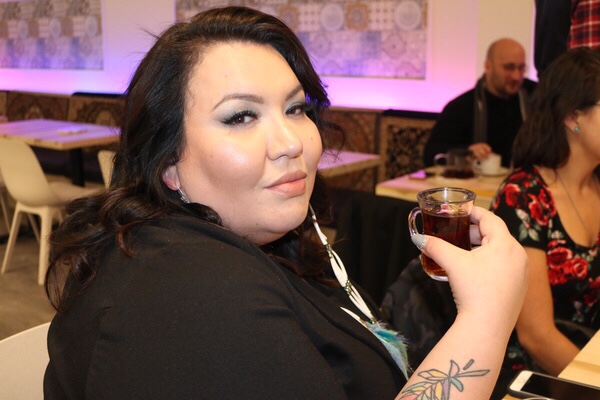 Tenille Campbell recently did a reading of her book Indian Love Poems to help fundraise for The Lighthouse in Saskatoon.

Botté Chai Bar owner Parviz Yazdani, who had known of Campbell through her poetry, became Facebook friends about a year ago and reached out to her for a reading at his venue in November. “I cold-called her and I said would you like to read your poetry, I’m a big fan,” said Yazdani, adding that the Chai Bar usually has monthly events where they try to give back to the community. “We always try to make a purpose out of what we are doing.”

So the Persian tea café, tucked neatly in a building called The Blok on Avenue B South, gathered cash donations for The Lighthouse, which shelters those most in need.

“It’s the right time of year to contribute to The Lighthouse, who had their funding revoked not too long ago — they are a good cause right in our neighbourhood,” said Yazdani. “A simple project, but everything came together really well.”

Each patron at the packed reading donated a cover charge towards The Lighthouse, and Campbell took no reader’s fee. With her sultry comedy and stories between and about poems, she had the audience giggling, sighing, applauding, and, her favourite thing: blushing.

“So last year in the process of writing this, I was trying to do a poem a day and I was stuck, and I asked someone to tell me a story, and she said “tell a story about kissing your cousin.” Now she hates that poem,” laughed Campbell, after reading it. The final lines are: “How could I resist his good looks? So much like mine.”

Despite the subject matter of “love”, or perhaps because of it, there is much laughter and many of the poems are packed with punchlines, while others evoke place, Dene language, crushes, sensuality, and romance at all ages in all kinds of places under all kinds of circumstances. On this particular night she focused on Cree love in honour of being on Treaty 6 Territory, “the land of our traditional enemies,” she joked. But she also read Dene love poems: “Dene love is a sudden bloom of wild rosehips, small wild strawberries, a feast for those who know where to look.”

Afterwards, Campbell signed books for new and old fans, sipping one of the many specialty teas, which serves pastries as well as various dishes.

“This place is a bit of a hidden gem,” said Yazdani. “We say if you don’t know where it is, maybe you’re not ready for it yet. We like to think of it as one big extended kitchen table where people can spend time and still be at home.”

And in that home, much laughter was shared while funds were raised for a good cause. Further donations can be made to The Lighthouse here: http://www.lighthousesaskatoon.org/donate/ and if you want to give your nicimos the gift of love, lust, and laughter, Campbell’s book, which won two SaskBook Awards, can be purchased at most bookstores, or online.