Durocher depended upon women during fast 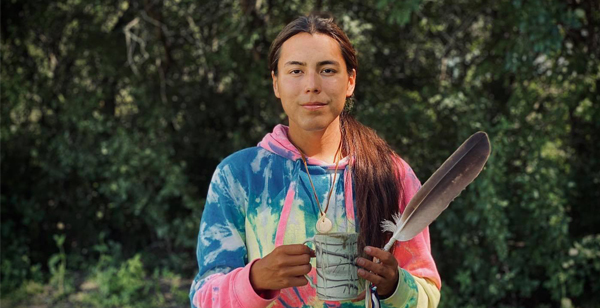 Tristen Durocher fasted on the lawn of the legislative building for 44 days this summer. One day for every member that voted against a suicide bill. Photo submitted

Tristen Durocher experienced hunger and confusion during his 44-day fast outside the Saskatchewan Legislature, but women were there to support him.

The 24-year-old Metis man made headlines for walking 635 kilometers from Air Ronge to Regina over 29 days in July to protest the Saskatchewan government defeating an NDP bill intended to prevent suicide, which has become a leading cause of death among Indigenous youth.

Durocher vowed he would stop eating for 44 days, one day for each member of the legislature who voted against the bill, but said he would end the fast sooner if the government took definitive action against suicide.

Large portraits of persons who died by suicide surrounded the teepee in Wascana Park where he stayed so that visitors would see that the human beings who were loved and lost were not just statistics.

Men and women joined Durocher on the walk but he wanted women around him during the fast.

“Women are just naturally nurturing and that's what I needed. I wanted women around who would help me decompress and ask me how I'm feeling, what I need, and how can they help. They were attentive and supportive. It kept me strong,” he said.

He drank only water and tea, but took vitamins and used traditional medicines that would promote cardiovascular health, boost his immune system, and keep his brain healthy. He didn't weigh himself but noticed that his clothes got looser.

“As long as I felt healthy and was feeling active, the numbers on the scale were irrelevant,” he said.

Near the end of the fast Durocher had some confusion. He had purchased a regular tobacco pipe, which is supposed to help with cravings. He asked a friend if he'd shown her the pipe he’d bought and to his surprise, she told him she had taken him to the store that afternoon to buy it.

“It was like having a little amnesia,” he said with a laugh.

“My friends and supporters noticed so I no longer went anywhere unsupervised.”

Prior to starting his fast, Durocher spoke with friends, elders and relatives who have fasted and knew what to expect. He warned young people that he had mental health and medical support, including having a doctor visit to check on him.

“I did not willingly try to endanger my health and wellbeing,” he said.

He admits it wasn't easy and visitors often questioned his action.

“When there is a fast there is an urgency to break it. I gave the power to the government of Saskatchewan. They could have broken it any day, so any harm from me restricting food is actually a harm that the province allowed because they had the capacity and the means to break it, but they lacked the will do so,” he said.

On the 44th day, September 13, the Walking with Angels camp had a pipe ceremony and feast, where Durocher had a bowl of buffalo soup.

Then he led supporters to the steps of the legislature, where he cut off his braid, which in Cree culture symbolizes mourning, letting go of pain, moving forward, healing, and starting again.

He made a noose with his braid combined with others donated by friends.

“Our braids tied into a noose and hung on the door handles of the legislative assembly is a powerful image that tells the story of the state having some responsibility and culpability in the suicides that happen in Indigenous communities because of their negligent indifference,” he said.

The group left the noose on the door for ten minutes then removed it and burned in the ceremonial fire.

Eleven days after Durocher ended his 44-day fast, the Governments of Canada and Saskatchewan and the Federation of Sovereign Indian Nations signed a promise to work together to create holistic suicide prevention services for Indigenous youth.

Durocher has said since then that he will wait and see what actually happens before commenting on it.

He intends to return to Manitoba soon, where he is a music teacher.