The art of storytelling as a way to connect culture, history, and contemporary issues remains a vital tool for accomplished documentary filmmaker, activist, and elder Marjorie Beaucage. 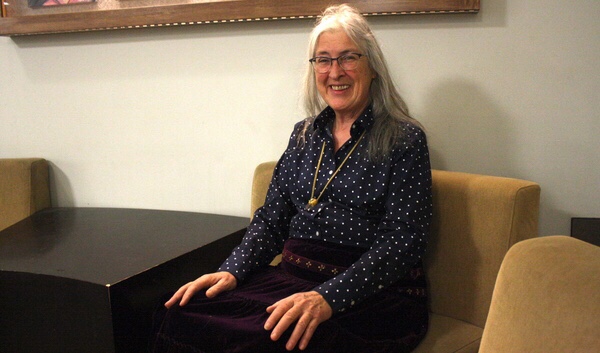 Elder and Storyteller Marjorie Beaucage is now using her skills and experience to help students at the U of S. Photo by NC Raine

From “Northern Labrador to New York”, focusing her lens on everything from two-spirt individuals to environmental concerns to homelessness, Beaucage has been using her camera for decades to share the stories of those often unheard.

“The camera is like a witness, it's like an amplifier. It helps people see things that they normally wouldn’t pay attention to,” she said. “I think my primary driving force for everything is for people to tell their own stories in their own voice.”

Beaucage, despite a prolific career, hadn't always been inciting change from behind the camera. After working for 25 years as a community organizer and educator, Beaucage jokes that she “ran away from home at 40 to go to film school,” studying film at Ryerson University and thus changing the trajectory of her career.

She co-founded the Aboriginal Film and Video Art Alliance in 1991, as well as worked as a cultural ambassador with the Banff Centre for the Arts, V-Tape, the Canada Council for the Arts, and the Saskatchewan Arts Board. She also programmed the first Aboriginal film festival in Toronto, and has been honoured with several distinctions, including a career retrospective in 2018 by ImagineNative and a 2018 Saskatchewan Arts Awards for artistic excellence.

She wants her art to spark conversations, she says, citing her 2017 film, Coming in Stories which educates about two-spirit people living in Saskatchewan, and continues to be screened for communities across the country.

“When I made the film about two-spirit people in Saskatchewan, it was because the community needed to start exploring that colonial garbage that we're under. So many suicides because of the homophobia and transphobia. I wanted to put out that video to start the conversation.”

Beaucage's newest role places her as the first elder-in-residence for the University of Saskatchewan Students Union (USSU), where she will provide students with a safe space to speak and share their ideas. She meets weekly at the USSU office for Elder Time, as well as meets with colleges and faculties across campus to share her knowledge and answer questions.

“It's a big challenge but I'm there for the students. I put most of my energy now into the youth because there’s a future there,” said Beaucage. “Whatever tools I have I will use to help them.”