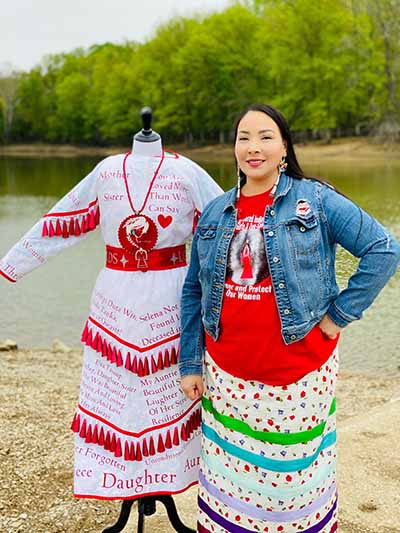 Agnes Woodward poses with the white and red jingle dress she created to honour and raise for MMIWG. Photo supplied by Agnes Woodward

Agnes Woodward unveils a new jingle dress she made to honour missing and murdered Indigenous women and girls (MMIWG) and their families.

Woodward is from Kawacatoose First Nations. She grew up in Regina and Saskatoon and has lived in the United States for the last fifteen years.

Woodward shared a video on Facebook of herself in the new dress as she danced jingle. She posted the video to participate and raise awareness for MMIWG on Red Dress Day.

“I made a white dress that has red jingles,” said Woodward. “I put words that [other MMIWG] family members had shared with me. It could be a quote, a nickname they had, a favorite memory, it was up to them. It was about plastering this dress with love.”

Woodward wanted the words on the dress to combat negative narratives often used to paint MMIWG. She also wanted to bring focus to the love that families carry for the women and to give feeling to the faces and names of the missing and murdered.

As Woodward spoke to the families and heard the stories about the meaning of the words they wanted on the dress, she knew this was a project she needed to do.
“I see the family members on the front lines of the movement,” said Woodward.

Woodward says advocacy is very important to her. Her family has been involved in the movement since the 1990s.

“I really had an inside way of learning,” said Woodward. “How much grief and pain and layers of healing that is needed. So, I really tried to just focus on the healing aspect.”

Dorion Whitehawk is from Kawacatoose First Nation and lives in Regina.  She has worn red every May 5th since her daughter was born four years ago. Before Whitehawk was born, her aunt went missing and was never found. 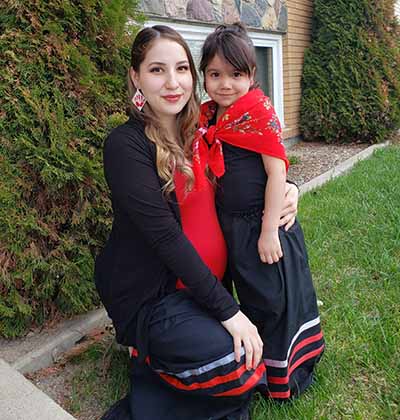 "My mom’s cousin went missing twenty-five years ago,” said Whitehawk. “Her name was Patsy Favel. My mom was really close with her and she still talks about it to this day. She doesn’t know what happened to her and she’s always wondering … I guess that’s who I wear red for.”

Whitehawk and her daughter wear red every year to raise awareness and honour missing and murdered Indigenous women and girls.

“I told my daughter let’s wear our red dresses,” said Whitehawk. “This is for the people that are lost and never made it home. All those women, men and even girls that unfortunately didn’t get to make it home to their families.”

Whitehawk hopes the yearly reminder of red dresses will keep people aware of the issue and create change.

“I really hope that non-First Nation people really understand that this is an on-going issue,” said Whitehawk. “If we don’t do something then it’s never going to be done.” 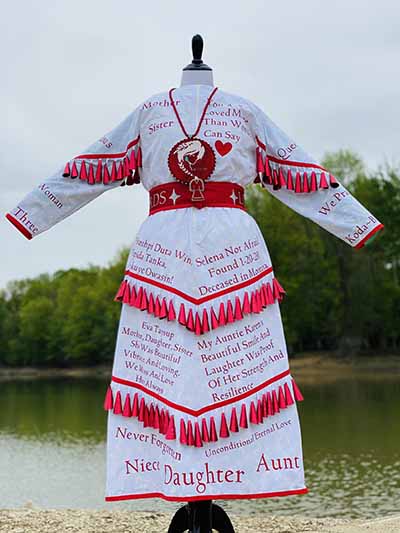 Agnes Woodward’s jingle dress (front) she created to honour and raise awareness for MMIWG. The dress has white fabric and red jingles. The writing on the dress are words from family members of MMIWG. Photo supplied by Agnes Woodward 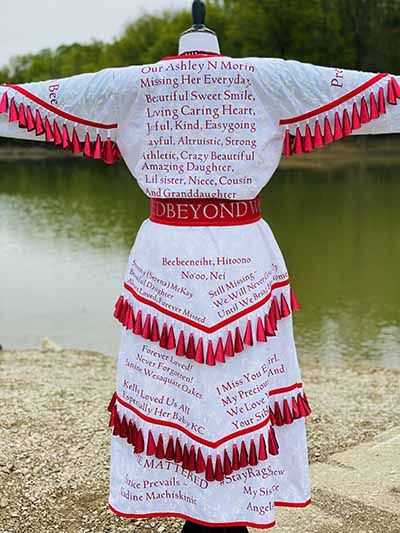 Agnes Woodward’s jingle dress (back) she created to honour and raise awareness for MMIWG. The dress has white fabric and red jingles. The writing on the dress are words from family members of MMIWG. Photo supplied by Agnes Woodward