Philip Favel is a 97-year-old veteran from the Sweet Grass First Nation. Favel enlisted in the Canadian Armed Forces in 1941 at the age of 19. While overseas, Private Favel served in France, Belgium and Holland and returned home to North Battleford in July of 1945. 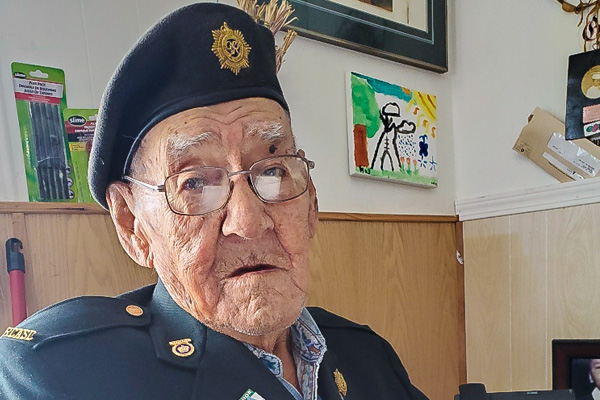 Philip Favel in his house with files relating to his veteran’s land settlement. Photo by Morning Star

According to Veterans Affairs Canada, at least 3000 First Nations members enlisted in World War II. Those who enlisted, Favel is the oldest surviving member.

“That land was given to me by the Government and the Department of Veterans Affairs,” he said. “They didn’t explain things right about the land off reserve.”

There is an issue with the process the government used to allocate land for First Nations Veterans.

The band is currently suing the government for compensation from Loss of Use. According to the Senate of Canada “Non-First Nations veterans could purchase land from Canada with a small loan from the federal government, but First Nations veterans who applied for loans were told they were limited to Certificates for Possession in the purchasing of reserve land.”

Veteran Favel arranges the files in his briefcase as he ponders the outcome of the court case. He hopes to see the reserve and his family compensated while he is living.

“Who knows how much longer I will be here,” he said.