A volleyball athlete from the Thunderchild First Nation received athlete of the week from the Alberta Colleges Athletic Conference (ACAC) which is the premier college athletic conference in Canada. 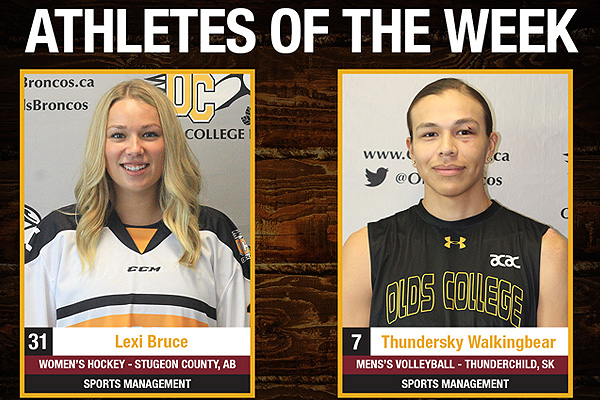 Thundersky Walkingbear, who plays volleyball for the Olds College Broncos, led the way in recent matches for the Broncos where he and the rest of the team gained confidence to win.

The Sports Management student-athlete Walkingbear received Player of the Game honours this past Saturday and was the go-to for the Broncos down the stretch.

“He led the way in virtually every stat and was instrumental in the split weekend which gave the Broncos their third win of the season - a first time ever in program history since rejoining the ACAC in 2012. His combined 24 kills, 23 digs and three stuff blocks makes him our nominee for Athlete of the Week,” according to a prepared statement from the A & W Broncos.

The other athlete is Lexi Bruce who was presented the female athlete of the week. She demonstrated poise and composure to help the team complete a weekend sweep of the NAIT Ooks for the first time in program history.

Thursday's game saw a back and forth match which the Broncos tied the game up at three with less than a minute left in regulation to force overtime. The Sports Management student-athlete from Sturgeon County, AB made 11 saves on 12 shots in the third period to keep the game close as the Ooks pressed hard. Saturday's rematch saw Bruce shine in net once again as she made several key saves throughout the game. She was a brick wall in the final 10 minutes as NAIT pressured hard and had several scoring opportunities as she earned her second career shutout by making 30 saves.