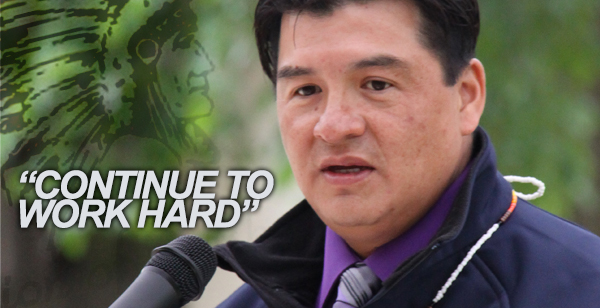 A permanent office, a new online gaming agreement and a major on-reserve housing investment from the federal government are some of the things the Federation of Saskatchewan Indigenous Nations is looking forward to this year.

Now in his third term, Chief Bobby Cameron said he’s excited about where the organization is heading.

The FSIN had a soft opening of its new treaty governance building, but is planning an official grand opening celebration soon.

“In 75 years, we have never owned our own treaty office,” said Cameron. “We are proud of it because we didn’t do that work for us, we did it for all those future leaders who are coming up behind us, so they can continue the good work for our First Nations.”

It took five years of work to procure the building.

“We officially move into our office in March,” said Cameron.

The decision to set down permanent roots was about creating a strong foundation for the organization now and in the future because doing so helps to establish stability, consistency and continuity within FSIN, he explained.

Cameron is looking forward to signing a historical online gaming deal with the province, which will be the first of its kind in Canada.

“Once it’s in full swing and hits the markets, we are thinking between $7M to $20M (in revenue) towards 74 First Nations is what will be generated for them,” said Cameron.

Online gaming exists in B.C and Ontario but in those deals the First Nations receive between 5 to 7 per cent of the revenue, but here it will be a 50/50 split.

“So we are leaps and bounds ahead of everyone else,” said Cameron.

It was a busy year for FSIN, with many highs and lows.

A proud moment for him was to see the number of high school graduates this year.

“It was a shining light during the COVID times,” said Cameron. “Despite the challenges, many of our Grade 12 students still succeeded.”

Over the holidays, the FSIN executive delivered winter clothing to those most in need in the major urban centres.

“There were hundreds and hundreds who were thankful that we did that, but there is still so much more to do,” said Cameron. “It was just our part to contribute.”

The social issues facing the urban First Nation population is a concern to FSIN.
“There are many reasons why First Nations move to towns and cities,” said Cameron.

Sometimes it’s to access education and programs and better their lives, but sometimes it’s because they have no choice.

“What we are trying to do at the FSIN, which is something we have been doing for several years, is to continue lobbying and advocating for the treaty right to shelter,” said Cameron. “In essence, to build more houses on reserve, so First Nations can house their families and those who have been wanting to come home can get their own house.”

That lobbying may have paid off.

He has heard the federal government will make a major investment in on-reserve housing so he’s looking forward to the release of the federal budget.

Indian Residential Schools dominated headlines in 2021 with the discovery of unmarked graves and the FSIN remains steadfast in its position.

Although he's pleased with the progress that’s been made on some fronts, even through a pandemic, he says FSIN will continue to work hard in 2022.