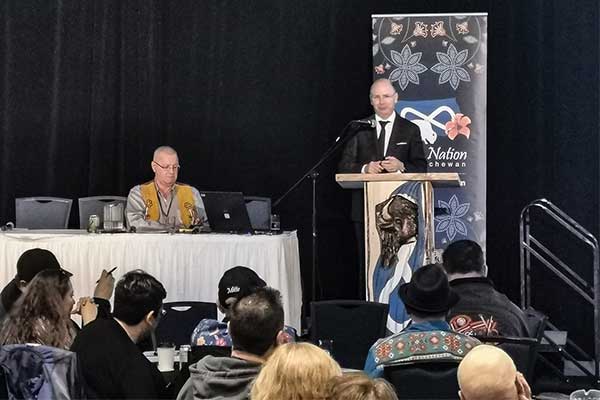 Lawyer Tom Isaac presented at the Ka tipaymishooyahk – We Who Own Ourselves Metis rights conference. He is currently retained to represent the MN-S. Photo by John Lagimodiere

Métis Nation-Saskatchewan President Glen McCallum has announced a significant development in the area of outstanding, historical Métis land claims in the north, south and central sectors of the province.

The MN-S is contributing $750,000 to advance the mapping process pertinent to moving discussions with Canada forward on the outstanding land claims. The monies with be evenly distributed three-ways to address issues throughout Saskatchewan.

“This is about Métis people throughout Saskatchewan to address and reconcile lands inherently belonging to our Métis citizens under our Section 35 rights,” MN-S president McCallum said. “This investment will kick-start the research process that will provide evidence of historic Métis land use that we need to be able to seriously negotiate a settlement with Canada.”

The agreements signed by the MN-S and Canada last year (2019), including the Métis Government Recognition Self-Government Agreement (MGRSA) and the Framework Agreement, were designed, in part, to acknowledge and redress the long overdue provisions under scrip.

The announcement took place at a Métis Rights Conference held at the end of February which was filled with discussions led by experts in the field of land rights, citizenship, constitutional reform and harvesting rights. The conference was called Ka tipaymishooyahk – We Who Own Ourselves.

“It is imperative our citizens understand their Métis rights and have the necessary assurances MN-S leadership will fully represent them at the table to secure those rights in Saskatchewan and in Canada,” said MN-S President Glen McCallum.

The MN-S gained a stronger voice with the signing of a Métis Rights and Self-Government Recognition Agreement (MRSGA) with Canada last June. It has empowered the MN-S to move forward on all core governance matters including government structures and financial accountability. Métis Nation – Saskatchewan (MN-S) citizens are ready to enter the next phase of negotiations with Canada on the road to self-determination and self-government.

Much of the work began immediately after inking the MRSGA.  Constitutional consultations have been held across Saskatchewan and citizenship has been on a steady incline.  Métis-specific health partnerships have been formed and initiatives are underway.  Education, housing and land rights have also been priorities of the MN-S’ democratically-elected leadership.

“We have a constitution and a very good relationship with the Federal government. There are over 400 people here interested in Metis rights. Many of the people here are new and excited about our progress in education and housing,” said President McCallum. “We have land rights. We have to assert them. The North West Land claim is what we are using to move our rights forward.”