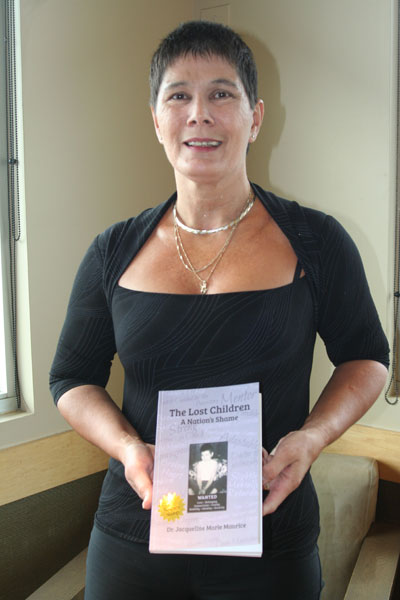 Dr. Jackie Maurice survived, just barely, 18 years in the foster care system as part of the 60’s Scoop, and came out with a lot of questions: about her own identity, her community, her capabilities after dozens of negative labels had been applied, and about the system itself.

“Every day myself and 20,000 others pay the cost of not having our most valuable resource: family.”

She has made it her life’s work to voice these questions and answer as many as possible, in order to bring about change and healing. Her book, “The Lost Children: A Nation’s Shame” was published last fall and is already in its second printing. Her story validates the experience of so many other survivors, and those lost along the way.

“We see foster care kids in the news on a regular basis, and it’s never good news,” she noted. “Missing women and children go missing a long time before they’re reported or reach the federal government statistics.”

And there can be no doubt going missing in the foster care system is closely tied to missing people: unravelling families and communities by disappearance, temporary or more often permanent, leaves lasting scars. Individuals are left in isolation with no path back.

“Foster-care is a great boot-camp for becoming homeless,” she notes drily. “Imagine your home burning to the ground with family members inside, now times that 14 times and that’s what I experienced in 14 foster homes.”

She also survived abuse and other trauma. “I’m not even convinced even to this day that Social Services believe that they did put the best interests of this child first.”

She now calls it the “Millennia Scoop” because it has continued on to the point where more kids have now been through the foster care system or are in care, than during the peak of Indian Residential Schools.

“I would have to say, let’s be honest, when Indigenous women and children go missing it’s long before you hear it at the parliamentary level or even the media level,” she says, noting she and many other children went “MIA” and were impossible to find. “Even within the medical situation and the education system they are in part responsible for blaming the victim.”

She was labelled repeatedly for the traumas she was surviving: “adjustment disorder, borderline personality disorder, slightly mentally retarded” — to which an Elder said to her, “at least it was only slightly.”

“The labels are very dehumanizing, very degrading, and very shame-based,” she notes. “No wonder we are not only marginalized but largely silenced.”

She calls this the systemic leftovers of the Residential School system, an oppressive legacy of cultural genocide, and she hopes that the leaders that respond to the provincial apologies also consult with the community before giving their response.

“This isn’t just Aboriginal issues, it’s Canadian biography, it’s part of the Canadian experience,” she notes. “Ignorance is bliss, but when you have books documenting this experience...you can no longer sweep it under the carpet.”

Telling a story validates others’ experiences, she notes, and there are so many out there struggling with their own systemically-applied burdens. She hopes that not only do the governments step up and acknowledge their part before changing their approaches to stop negatively impacting mental health and addictions, emotional health and well-being, and basic self-worth and self-esteem. But that victims stop being blamed, and the inflictors of trauma start being responsible. That communities and all nations including the Canadian, Métis and First Nations “collectively come together and create a meaningful response that will acknowledge, not only create an apology, but acknowledge the multiple traumas and losses and the impact of them, then we will have truth and reconciliation as it relates to the foster care system and the 60’s Scoop experience.”

When individuals and systems step forward and acknowledge their actions of wrongdoing it creates what she describes as a portal of change and openness for healing transformation and forgiveness, not only just relief, and healing for those most impacted.

“This is something that really happened, it’s part of our history that we need to know and once we know we have the right to be responsible, to be proactive and to ensure that it stops happening,” she noted. “With Remembrance Day just around the corner, we can think of a cultural genocide right in our own back yard. Let’s pay homage and honour to those lives lost, those who were in a war, I don’t know if it’s a battle won...the battle won for me was to surrender [all the negativity of the experience] and to take a stand for those who can’t yet.”

“I guess I would say for everyone else beginning their healing journey...it’s not just in your imagination, don’t be invalidated there is hope and you have a way to heal, give voice, and be a part of the solution: say enough is enough. We’re no longer alone.”

Meanwhile she will continue to speak out and educate as much as she can, in hopes of creating spaces for change and healing. She can be reached at jackie.m.maurice@gmail.com.