The Zombie Apocalypse was unleashed in the Broadway Theatre on July 14th: a couple dozen aspiring film-makers who completed the first Saskatoon Tribal Council Film Camp brought to life three zombie films, a documentary, and a blooper reel. 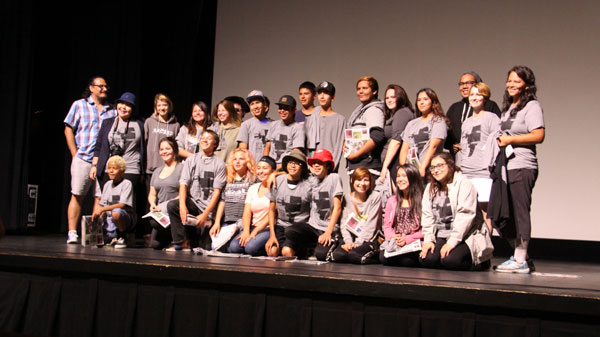 The creators of The Zombie Apocalypse at The Broadway Theatre in Saskatoon.

Marvin Jimmy of the STC’s Education Partnership Program explained that he and local film-maker/artist Marcel Petit had been in discussions about the project for some time, and funds finally became available to proceed. There was representation from Saskatoon, Muskoday, Mistawasis, Moosomin, Whitecap and Kinistino. Ryley Seesequasis, Sarah Vermette, Melody Wood, and Zoey Roy mentored four film groups while Petit created, oversaw, and coordinated the camp.

“I wanted us to tell our own stories in the way we wanted to tell our stories. Our stories are Indigenous because that’s who we are as people,” noted Roy, giving kudos to the young storytellers.

Seesequasis observed they caught on incredibly quickly, and encouraged them to continue pursuing film-making. Wood echoed her pride in the youth. Vermette noted that creative outlets help youth find their voice, and she watched many youth blossom. “Just the process of storytelling is going to be extremely valuable to them,” said Vermette.

From scripts to filming, directing, acting and editing, the youth aged 14 to 16 did all the work, guided by their mentors.

Shaye Bear from Muskoday, age 15, said it felt good to hear live audience response to the film she worked on.

“I came back with some more knowledge of filming. When I first heard about this camp I was scared I wouldn’t be able to do it,” Bear noted. “We all had to show each other what to do and had to actually talk and get to know each other. We had a lot of teamwork.”

Petit agrees, and says something like this when he was that age would have not only meant the world to him, but a far better Star Wars sequel for the world. As it was, he grew up enacting scenes without a camera, and made films in his head, waiting for the day he could make his dreams come true. Now he’s passing that dream on as fast as possible, hoping to reach other artistic youth.

“When I was young I didn’t know I was allowed to do it. It took me until I was in my 30’s,” said Petit. “I hope they come out with a stronger voice, coming back to their communities. We encouraged them to go capture their relative’s stories, their Kohkums and Moshum’s stories.”