Monument for veterans unveiled at this year's B2B

The biggest moment at Back To Batoche 2016 was the unveiling of the engraved veteran’s memorial on Saturday, June 16th. The champion behind the cause, Lennard Morin, said it had taken him six years to really gather enough momentum to build the monument, and in the first two years he almost gave up a number of times. 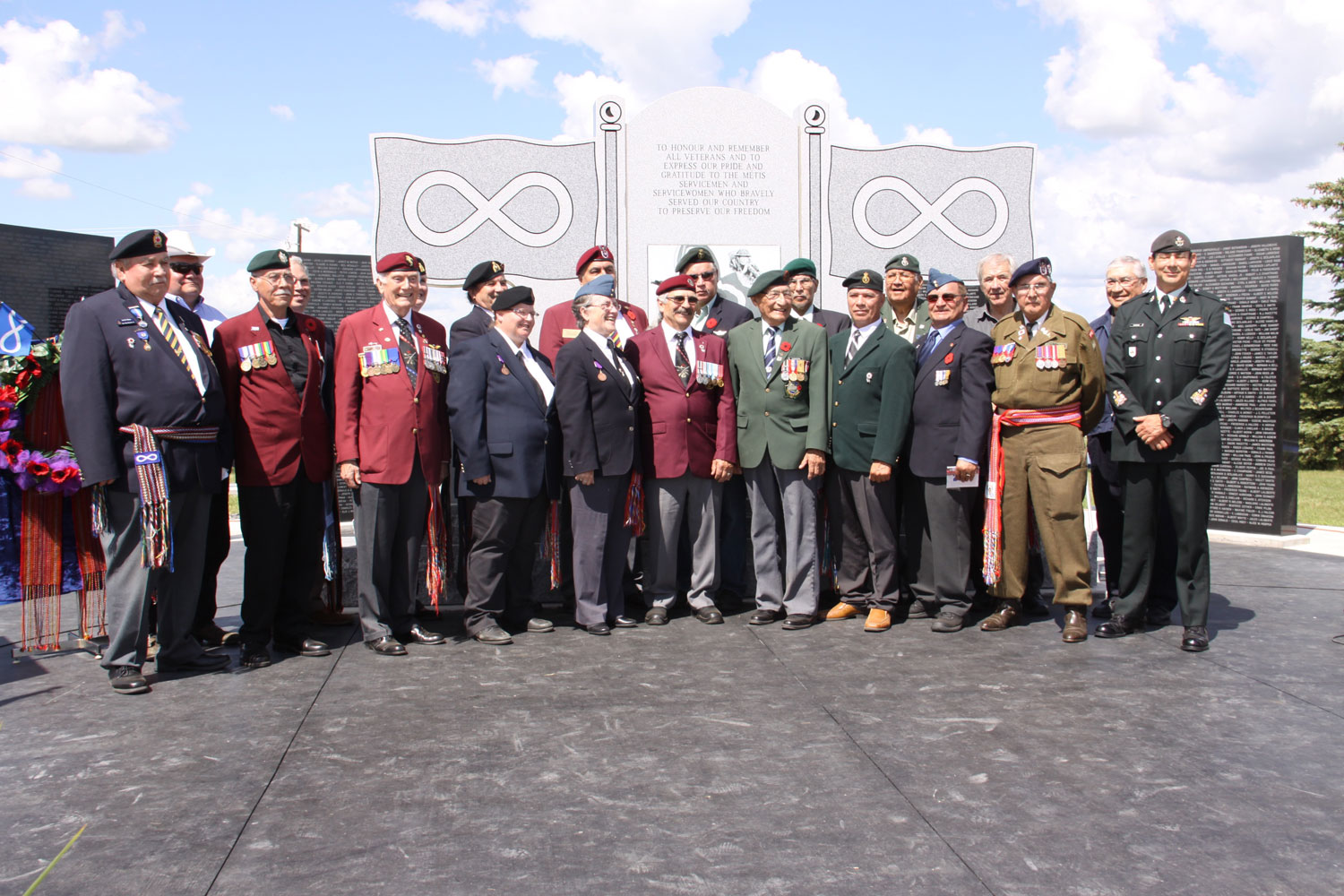 “I come from a military family — I have three uncles on here, one is buried in France, so that idea of a monument began in Cumberland House,” noted Morin. “A lot of doors were slammed in my face...I carried on and I got a lot of help. This was a team effort.

“This monument remains silent, like all monuments, but it’s a reminder for our youth that we owe the veterans a great debt for the sacrifice they made. That’s a reminder for the youth, for the cost of freedom.”

Morin is the MN-S minister responsible for Veterans, and had erected a memorial cairn in Cumberland House when he was mayor there. This was where the vision came from, and Gabriel Dumont Institute dedicated considerable resources to spearheading the fundraising, combined with various Métis and veteran groups and federal government contributions, and the research of Cathy Littlejohn. At the ceremony, Manitoba Métis Federation (MMF) pledged the $35,000 shortfall to cover the remaining costs in the three hundred thousand required to build and engrave the imposing circular granite monument erected on the Back to Batoche grounds. 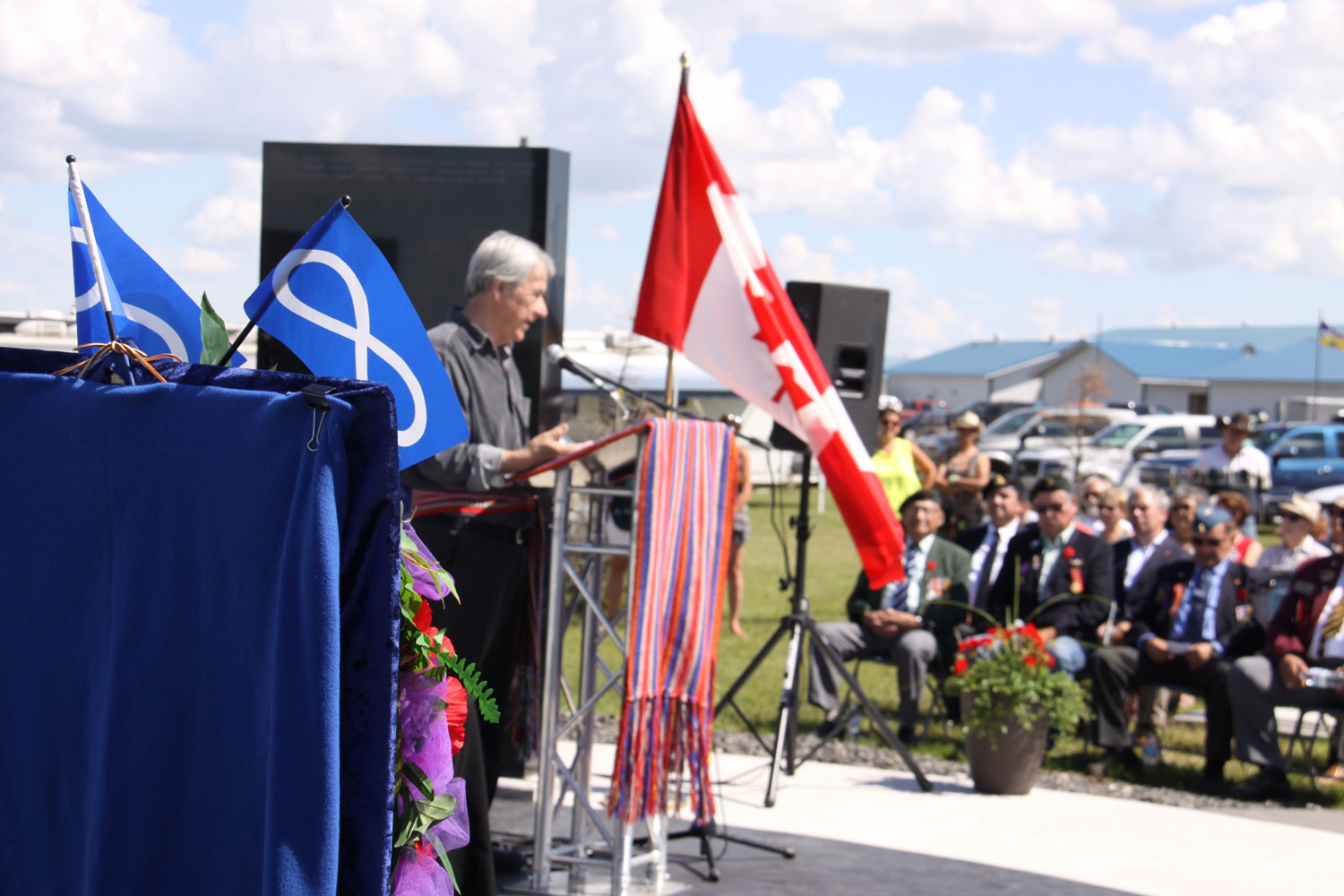 Lennard Morin addressing the crowd at Back to Batoche.

Check out our photo gallery of Back to Batoche.

The monument was built to not only remember the veterans of 1885 and beyond, but those of the contemporary era, many of whom have not been treated fairly. Clement Chartier, president of the national Métis Federation, noted those lucky enough to return home often became leaders for the Métis communities.

“We are showing as a people, as a nation, these veterans the respect they so richly deserve,” noted Chartier. “We’re still missing, in Canada, the recognition of our Métis veterans, particularly those that served in World War II...it is only our Métis veterans that have yet to be acknowledged or compensated for the losses they have.”

He hoped before the last veterans from WWII were gone, they would be acknowledged, to ensure their families knew their sacrifices weren’t in vain. David Chartrand, president of MMF, noted that perhaps the current Prime Minister was the one to bring about justice to the long-deserving Métis veterans who were the only group excluded from reparations and settlements. A moving highlight of the event was the Act of Remembrance by Edwin St. Pierre and Harriet Oakes in English and Michif, and words from Harriet on how difficult it must have been for those young veterans sick or hurt in hospitals abroad, or who left young families behind in order to defend our freedoms, with no way to get word back home.

Less solemn were the horseshoe tournaments, bannock bake-offs, and fiddling and jigging contests. Each day featured a different province under the big-top, with musicians and dancers celebrating the Métis culture. Alberta, Manitoba, Ontario and British Columbia, were all celebrated along with local Saskatchewan entertainers. Visitors and campers hailed from all the western provinces, and some from further afield. Marlene and Sony Vandale were named Mr. and Mrs. Batoche.

The chuckwagon and chariot races were held on the weekend, drawing a crowd, while Sunday included the annual procession to the Batoche historic cemetery, where those killed in 1885 were remembered, honoured, and prayed for. The Batoche church bell tolled as the procession approached the graveyard, and words were shared at the mass gravesite, before people returned for the formal closing of Back to Batoche 2016.