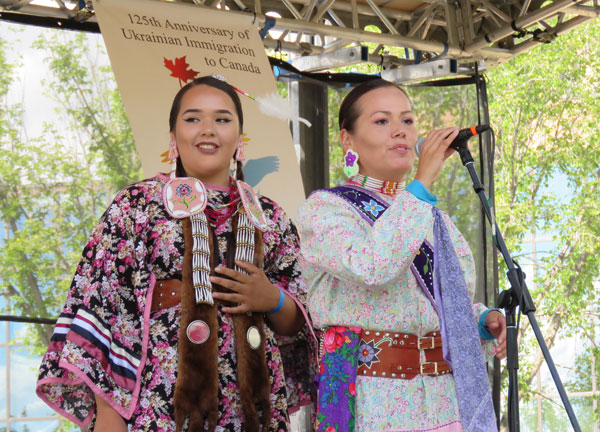 Jayda (left) and Chasity Delorme perform as part of the cultural exchange at the Year of the Saskatchewan-Ukrainian Festival. Chasity served as a cultural planning partner for the event. Photo by Linda Mikolayenko

To mark the 125th anniversary of Ukrainian immigration to Canada, the Regina branch of the Ukrainian Canadian Congress engaged in a first-ever cultural exchange with the Aboriginal community. The Year of the Saskatchewan-Ukrainian Festival held on August 13, 2016 on Treaty 4 land at Regina’s Victoria Park featured a wide range of talent from both cultural traditions.

The first Ukrainian settlers in the province were vastly under-prepared for the conditions that awaited them, said Holly Paluck, Festival Committee Chair.

Inviting the Aboriginal community to be part of the celebration of this milestone year was an obvious choice, said Paluck, and she was delighted when Chasity Delorme of the Rainbow Dance Troupe came on board as a cultural planning partner.

“As we met and planned over the past few months,” said Paluck, “we realized through our discussions that we had many common cultural practices.”

The result of the planning was a day filled with ceremony, music, singing, dancing, stories, displays and a showcase of contemporary fashion designs from both cultures. The food concession served bannock as well as perogies.

At an event like this, however, some of the most significant moments are not staged or scripted.

As someone of Ukrainian-Canadian heritage now living in northern Saskatchewan, I had the privilege of collaborating with Elder Hazel Dixon. Dixon, who lives in Regina, is of Ojibway/Mohawk ancestry from Ontario. We are both passionate about oral storytelling and had the opportunity to share legends and tales from our respective traditions, both on the main stage and in the tipi on the grounds. For example, Dixon told the story of how the turtle got its shell; I told the legend of how the sunflower came to be.

Storytellers Linda Mikolayenko in her red boots and Elder Hazel Dixon in her moccasins told stories from their respective traditions as part of the cultural exchange at the Year of the Saskatchewan-Ukrainian Festival. Photo by Norbert K. Iwan

We engaged in dialogue with each other and with those attending. Two encounters with gentlemen by the name of Tony stand out.

Tony Mazyn approached us after our first session in the tipi. His grandmother had arrived in Canada in 1906 when she was only six years old. Her family homesteaded in the Hafford area. Mazyn recalled his grandmother telling him that the Aboriginal people who came through the area were extremely helpful to the new immigrants, including pointing out which mushrooms were safe to eat, and sharing local remedies.

“That’s how they survived,” said Mazyn.

Tony Cyr casually sat on the grass beside us near the tipi while we were in between two sessions and struck up a conversation. When he mentioned that he knew a story about sweetgrass, I invited him to tell it. Dixon and I were enriched as he eloquently shared the story he first heard told orally six years ago. We shook hands, and Cyr moved on to another part of the festival. 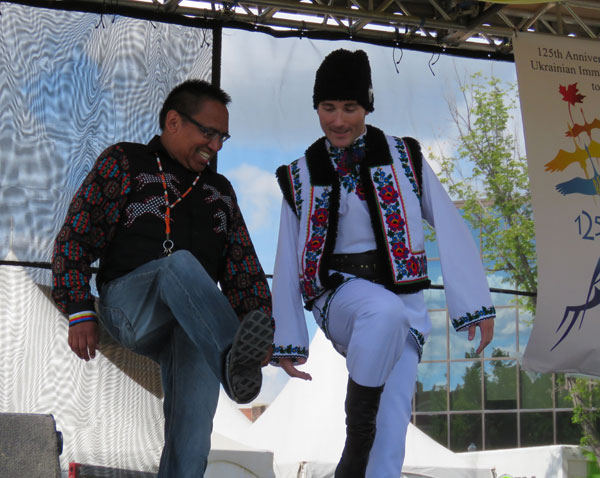 Jeff Cappo (left) gets a few Ukrainian dancing tips from Adam Breckner of the Pavlychenko Folklorique Ensemble. Cappo served as one of the emcees for the cultural exchange at the Year of the Saskatchewan-Ukrainian Festival. Photo by Linda Mikolayenko

Against the backdrop of the formal cultural exchange and an entertaining show for the general public, were many such private exchanges of a few words and a handshake. Fittingly, the program concluded with an open invitation to join hands, form a circle, and participate in both the Kolomeyka and the Round Dance.