Not only are they competitors on the dance floor but they call each other brothers. Patrick Mitsuing and Dustin Strongarm are fancy powwow dancers who competed against each other in this year’s Northern Lights Casino (NLC) powwow spotlight dance special which is held annually on Thanksgiving weekend. Even though they both faced challenges ranging from surviving a car accident to losing a loved one, it was their passion and determination for dancing that helped them through these trying times. 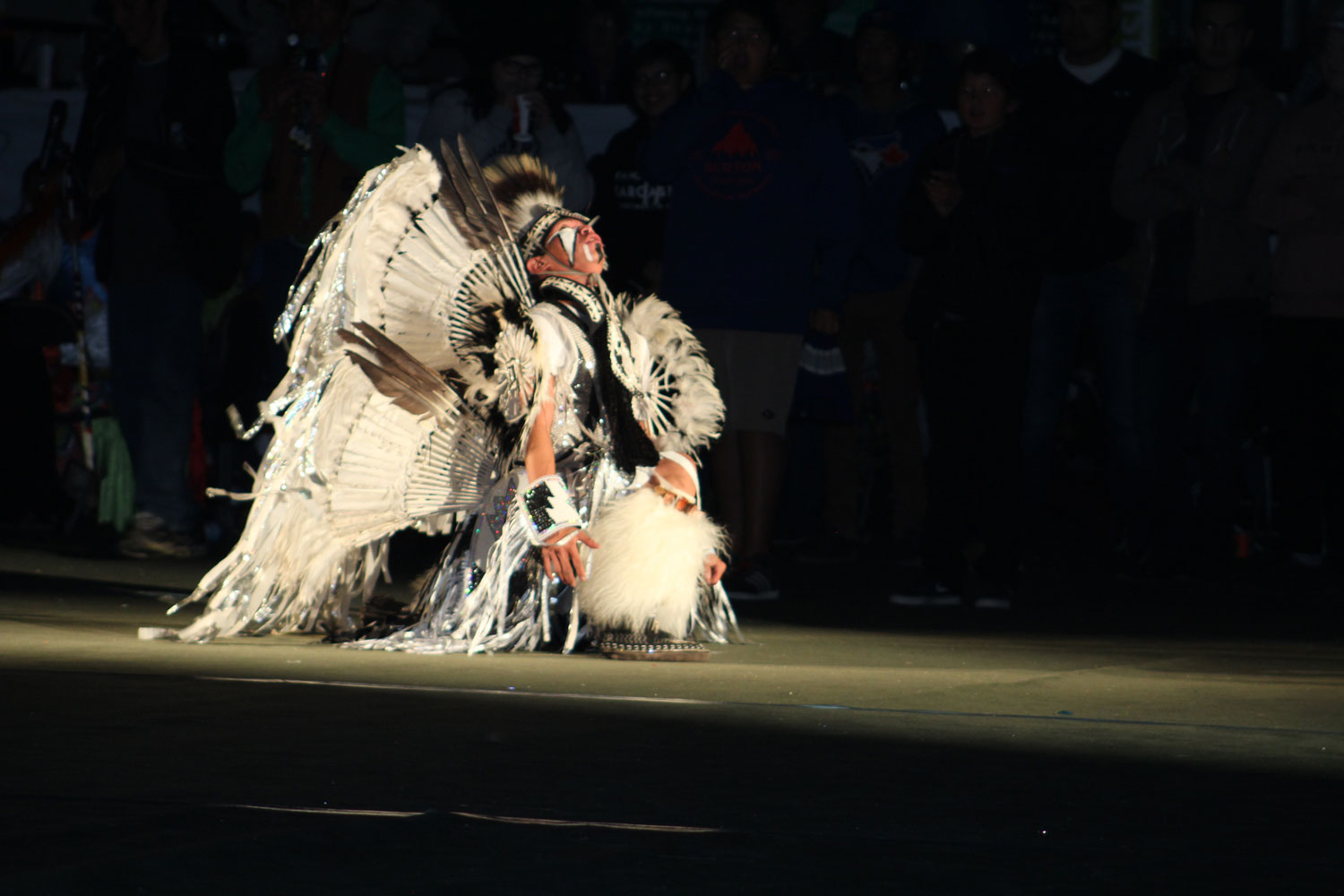 Mitsuing competed in the spotlight dance special for years and had placed in the top two for the past six years. But he felt his latest win was even more special as he was dancing for his late father, Thomas Ouellette, who recently passed away.

“Dancing was helping me feel better to cope with the grieving process. Before my dad passed away, he said to keep dancing. I took my heavy heart out there, called my mom and said ‘I’m going to dance for dad’,” says Mitsuing, 31, this year’s NLC spotlight special winner. “I stopped when I was dancing and I looked up at the crowd and I could see the spotlight shining at my face. I felt a warm feeling like he was watching.”

At the end of the special, Strongarm was cheering on Mitsuing along with the crowd and saying ‘this guy should win’. 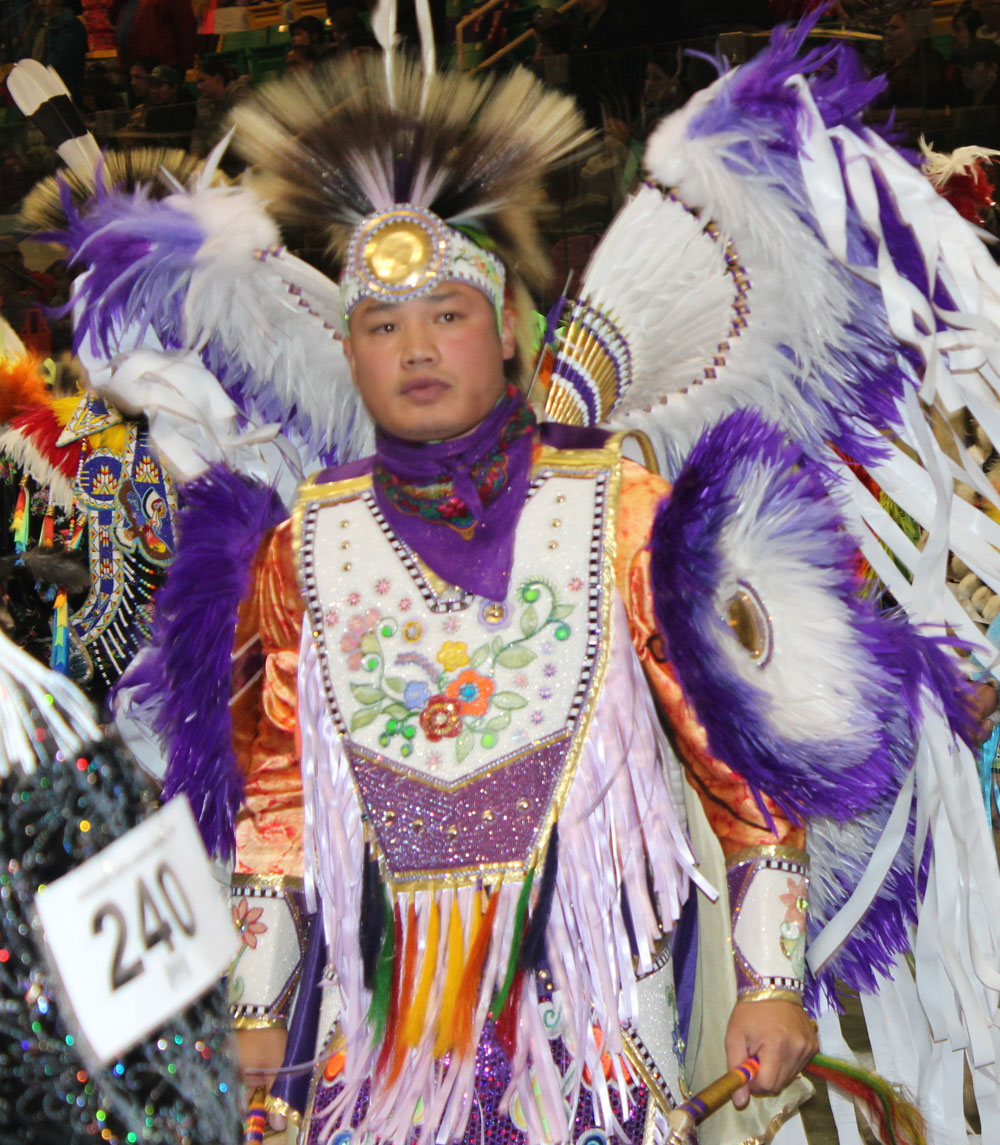 For more photos from the NLC powwow, visit our Photo Gallery.

“Competing against your brother is never easy. It’s kind of like dancing in the mirror. You’ve danced with this person for so long, that you become a part of each other. It’s fluent,” says Strongarm, 31, from Kawacatoose First Nation. “I’ve danced against Pat a lot, but this year’s spotlight, I felt like I was dancing with him. It was a very traditional feeling I had.”

Strongarm endured hardships of his own recovering from a sports injury and a recent car accident. He tore ligaments in his shoulder and due to his injuries his summer powwow dancing came to a halt.

“It was a tough recovery. But the past week or so, I’ve been conditioning myself so I could at least make an effort to dance in the spotlight. I still have bad lower back problems,” he adds.

Strongarm, who is a youth coordinator at Saskatoon Indian and Métis Friendship Centre, says through self healing, he was able to strengthen himself before the NLC powwow.

“About a week before the special, I 7K every single day. I did a lot of practice dancing by myself, with my father Sanford Strongarm and my brother Sanford Jr. [who sang] straight songs,” he adds. “In UFC they have guys who prep you up and get you pumped up; well these are my guys who do that for me.”

Mitsuing, creator of an online company called Powwow Times, says people don’t know how much they are risking their bodies. At anytime, they can fall on their face or twist an ankle but that doesn’t stop them from dancing for the people.

“We’re doing all this crazy stuff for the crowd. We really want to entertain the people and dance for them,” he adds.

According to Richard Ahenakew, the chair of this year’s NLC powwow, he says this dance special generates a huge audience as big as 2,900 people and it is the crowd who decides on the winner.

“It’s cool when you’re on the floor because you judge [the spotlight special] by how loud how people cheer and clap. You can barely hear yourself think,” says Ahenakew, who is also the NLC General Manager. “When the spotlight dance is on, you’ll see most of the stands filled. The athleticism, the strength, and the determination that they have—it’s incredible. Everybody loves it!”

Although the two dancers compete against each other every year, Mitsuing and Strongarm value their friendship more than a dance competition.

“We love each other like brothers,” says Strongarm. “It’s a special bond that no one could take away.”