Dr. Freda Ahenakew legacy will live on with Library naming 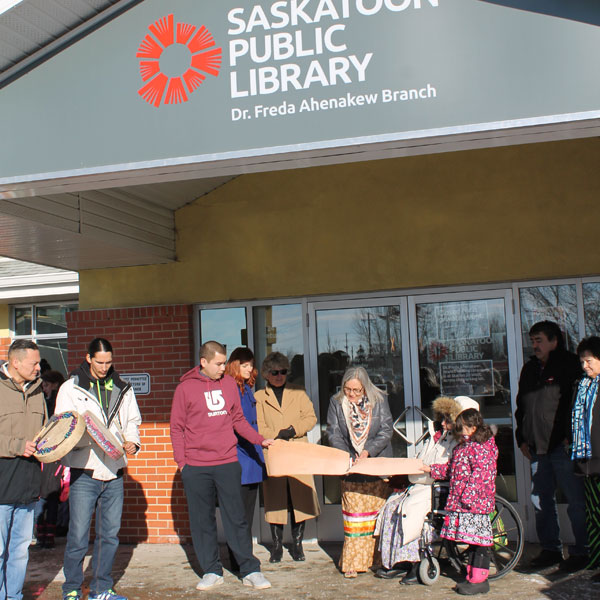 Dr. Freda Ahenakew, one of Canada’s most active proponents for the preservation and revitalization of the Cree language, had a Saskatoon Public Library (SPL) branch named in her honour at a moving and humorous ceremony hosted at Station 20 West.

The location of the event was moved from the Library on 20th because of the size of the crowd. As Office of the Treaty Commissioner Executive Director Harry Lafond noted, “Not only did Freda raise a huge biological family, she also made a huge Cree family. Her work created a national network that has dedicated their lives to reserving the Cree language. This is the key to the rejuvenation of our communities and we need to honour people like that.”

According to her daughter, Josephine Greyeyes, family came first and then work so she worked many hours. “My mom had twelve children and now has fifty seven grandchildren, one hundred and five great grandchildren and as of yesterday five great great grandchildren. We had to refresh the number yesterday,” she laughed. “She was a very humble lady and to have something like this named after her she would be shy. Whenever she received an award, she was appreciative but it wasn’t her reason for doing what she did. She saw we were losing our language so she wanted to preserve it in written form so that it would be available for those wanting to learn it and to revitalize it.” 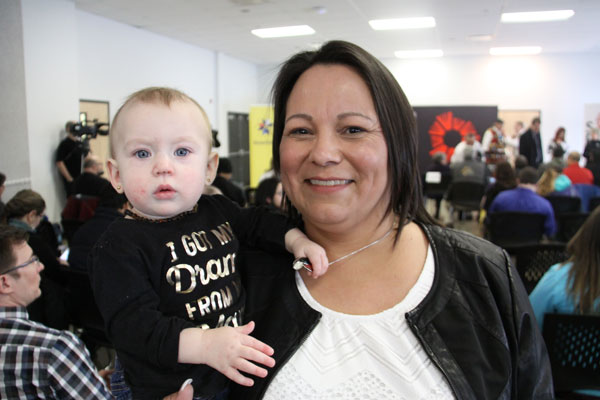 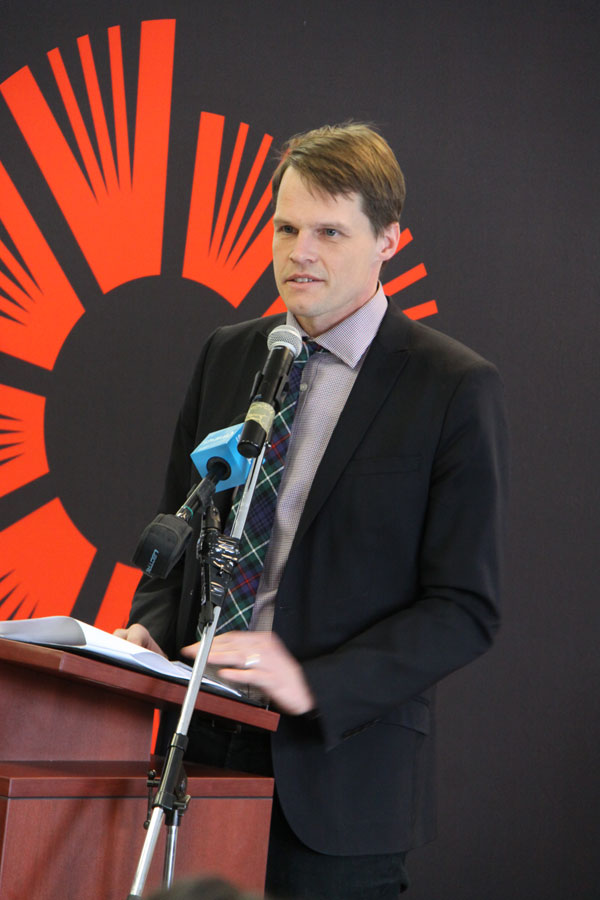 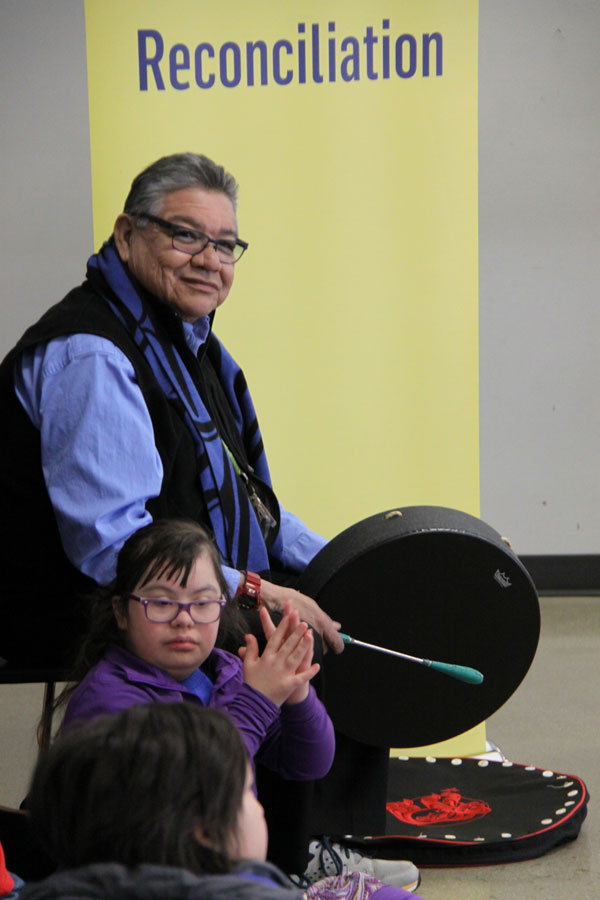 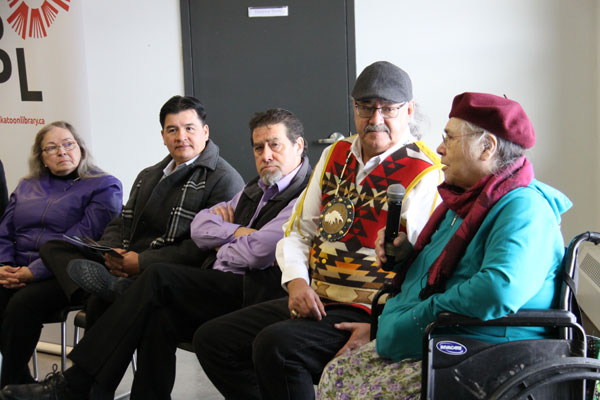 Ahenakew was born on Saskatchewan’s Ahtahkakoop First Nation in 1932. She left school in Grade 12 to marry, but many years later noticed that some of her children were not engaged in their education. To lead by example, she joined her children on the school bus and completed high school at the age of 38. That was the beginning of what would become a tremendous academic career, as she received both Bachelors and Masters Degrees and held professorships at both the University of Saskatchewan and University of Manitoba. She also served as Director of the Saskatchewan Indian Languages Institute from 1985 – 1989. She received many honours and awards, including two honorary doctorate degrees and the Saskatchewan Order of Merit (2005). She was also made a Member of the Order of Canada in 1998.

“This is a very proud and humbling day for SPL, and we’re so pleased to be able to honour the tremendous legacy of Dr. Ahenakew in this public and permanent manner,” said Carol Cooley, CEO and Director of Libraries with SPL. “It is particularly fitting that Freda, who was such a strong advocate and role model for both language preservation and education, should have a library named in her memory.”

The new name was chosen following consultation with Elders representing Indigenous people living in Saskatoon and area. The change was also prompted by SPL’s commitment to responding to the Truth and Reconciliation Commission’s Calls to Action #79, and SPL’s corresponding membership with Reconciliation Saskatoon.

“It was a beautiful feeling that she is being recognized and her years of hard work and dedication are recognized,” said Josephine. “For our family it is an honour that the Saskatoon community did this. Saskatoon is home for most of us. Muskeg is our home but a majority of our time was spent here. For the City to recognize her is a big deal.”

The naming event was hosted by Freda’s relative Eugene Arcand with an opening prayer by Maria Linklater. Young people sang a song and drummed and several dignitaries also came to honour Dr. Freda. “What a visionary woman to do the work she did at that time and to raise such an amazing family,” said Saskatoon Mayor Charlie Clark. “As we try to move closer to reconciliation, it is acts like this that the Library has done that show what reconciliation can be.”

Arcand noted that long after we are gone, the Dr. Freda Ahenakew Library will still be here to remind us of her legacy and the importance of language. Josephine will also remember the language teachings, she can understand it well but admits she can’t speak it well, but her mom’s legacy for her is different. “Hard work and determination is what she gave us. If we take anything from her life’s work it was she never gave up. She went back to school with her oldest 10 children and then had 2 more and went back to university when I was very little,” said Josephine. “And she raised us all on her faith, her traditional spiritual values and her devotion to the Catholic Church. She very much believed that we could live in both worlds. Prayer was our foundation. We start every day with prayer and in every joyous occasion and also in every struggle to pray. That was her foundation and has become ours. Her gift to us was her faith and determination and to strive to be the best versions of ourselves.”

“Today our family is humbled. I want to thank the City of Saskatoon and the community, our family and friends and also those that are carrying on her legacy of research and development of Cree text and language. The University of Manitoba is still working on transcribing her work...she had so much that they are still working on it. But after all her many accomplishments, she was our mom first and she made us a priority.”