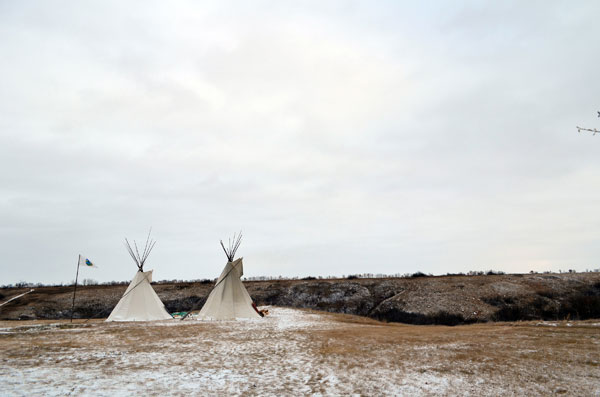 The 1,808 moccasin vamps that form the Walking With Our Sisters (WWOS) Exhibit commemorates Canada`s 1,200 missing and murdered Aboriginal women. The vast majority of the vamps were made by Aboriginal women from across the country and then submitted to well known Toronto based artist Christi Belcourt. She originally conceptualized the exhibit and sent a call out through social media hoping to get about 500 vamps for the show.

However, the overwhelming nation-wide response resulted in 1,808 moccasin vamp submissions.

The Grand Opening of Walking With Our Sisters was at 7:00pm, Friday, Oct. 30th and coincided with the first Grand Entry of the 2014 Annual FSIN Powwow and Cultural Celebrations at Saskatoon`s Sasktel Centre.

Amongst other unique aspects of this exhibit is that no government money is requested nor accepted by WWOS with all money being generated through various fund raising efforts.

To that end, a blanket dance for WWOS was held on the last day of the Pow Wow and to everyone`s disbelief, $1,808.00 was generously given by the people….the amount matching the number of vamps in the WWOS Exhibit!

WWOS Exhibit is a truly amazing and ground breaking endeavor as everyone involved from the Bundle Keepers, the Grandmothers, the Volunteers and the Fire Keepers did so on a volunteer basis.

In as much as it was artistic, it was also a commemorative and spiritual ceremony in respectful and solemn remembrance to Canada`s 1,200 Missing and Murdered First Nation and Metis Women.

An added and important component to the Exhibit was that a fire was started with the arrival of the 1,808 vamps and the sacred fire burned continuously for approximately 21 days, 24/7, non-stop.

Men, from different nationalities both from the City of Saskatoon and from the surrounding community came together and had several meetings to discuss and plan on they could contribute and assist the women as Fire Keepers.

Several went into the Nesbitt Forest to cut wood. On behalf of the Beardy`s Okemasis First Nation, Councilor Kevin Seesequasis generously offered assistance by donating split firewood with the help of inmates from the Willow Cree Healing Lodge.

On Dec. 2nd, a Volunteer Appreciation Night was held and each Volunteer and Fire Keeper was presented with an Eagle Feather by WWOS. The exhibit drew over 3000 people to Wanuskewin. The host committee wants to send a big thank you to everyone.