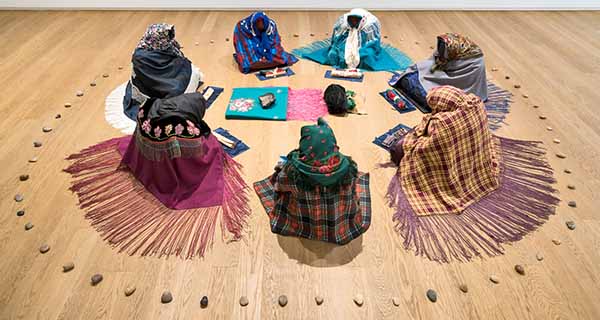 The exhibition “An Apology, A Pill, A Ritual, A Resistance,” is a group exhibition of more than 20 artists works which, like its name, “is sort of an incomplete list of things that are intended to promote healing or wellbeing,” said Indigenous curator Tarah Hogue.

She hopes the exploration of how artists are thinking about health and healing will prompt thought about that in their own lives.

Saskatoon-area artists include Ruth Cuthand, Wally Dion, Adrian Stimson, and Linda Young, as well as others from territories across Canada and the US. The works are exhibited in the ground floor gallery, which is always free to the public, and in the third floor gallery.

“The works on the ground floor are framed in relation to thinking about treaty and the relationships within how treaty is a framework for good relations. So the work from Linda Young from Onion Lake references Treaty 6 directly. Kohkoms wearing their head kerchiefs and shawls who actually represent the female counterpoint to the treaty signatories,” Hogue said.

Some of the works in that space honour Indigenous matriarchs and their role in Indigenous medicine, such as jingle dress, which has been performed for healing and strength for generations, she said.

Young created “the kohkoms” for an exhibition in 2006 curated by Adrian Stimson at the Mendel, in response to an art installation by Edward Poitras titled Internal Recall, with seven male Indigenous treaty-signers physically bound. “I was interested in his installation because it’s very striking,” said Young, adding that her own work focused on land and women and that connection to treaties and history. She followed protocol and offered tobacco to Poitras, which he accepted.

“I found his installation compelling because it felt like these men had been bound to a contract that made them prisoners more than people negotiating with equals.”

Her kohkoms have been shown at the Mendel, Wanuskewin, and were the feature of a quiet reflection space during the Missing and Murdered Indigenous Peoples Inquiry Hearings in Saskatoon. When she was asked to participate in the Remai exhibition, she followed her usual protocol: offering tobacco, smudging, praying and consulting her Elder.

“When I do show any of the pieces in different exhibitions I always follow protocol, for me it's the best way I can feel okay about exhibiting works of art that make people feel a certain way. When creating works of art, you have to be mindful,” Young said. “The viewer creates their own narrative when they see the kohkoms, so every viewer - to me, that's their story.”

With this installation, she asked women in various communities if they would loan a shawl, blanket, or scarf for the kohkoms, offering tobacco.

“Ten women contributed. And so the ten women for me represent the strength and courage and leadership that women have and share with the world,” she said.

“I think grandmothers are universal, a universal image and kinship that everyone understands. It’s not just about Indigenous grandmothers, but the spirit of grandmothers throughout the world. And in this case the women who are involved represent strength, and knowledge that the grandmothers shared with us, and have passed on to us over time, over many generations.”