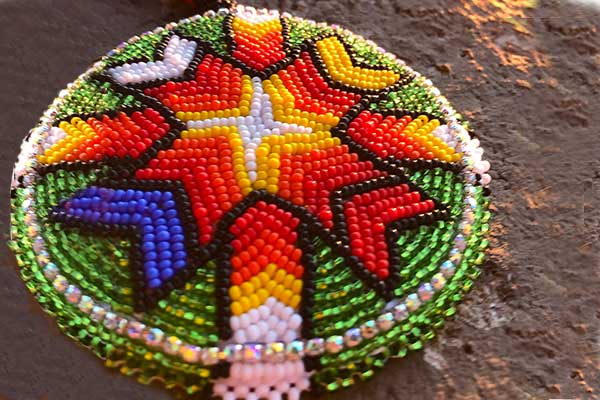 The beaded medallions, designed and made by Constant and Sunchild, to be presented to the 2020 Indigenous Juno nominees. Photo: Honey Constant

Two Saskatoon-based artists, Honey Constant and Keith Sunchild created twenty hand-crafted and emblematic medallions, which were to be prominently featured at this year's now-cancelled Juno Awards in Saskatoon. Although the spotlight may be gone, their artistic work and enthusiasm have not lost any shine.

“The medallions are something Honey and I created with our own thoughts and processes. Being able to say 'I created this on behalf of (Wanuskewin') for all these artists' is still something very exciting and rewarding,” said Sunchild, member of Thunderchild First Nation.

The medallions were a result of Candace Wasacase-Lafferty forming a 2020 Junos Indigenous Relations Sub-Committee in order to weave more Indigenous components into this year's awards. After consulting with Wanuskewin Heritage Park, the committee commissioned Constant and Sunchild to create twenty medallions to be presented to each of this year's Indigenous Juno nominees.

“I asked them to come up with a medallion represented all Indigenous people: First Nation, Metis, and Inuit. Something that reflects the land that the event is being hosted on,” said Wasacase-Lafferty. “There was a lot of thought and care that went into how these medallions were to reflect the diversity of people here in Saskatchewan.”

In each medallion, the geometric design honours the traditional patterns of Plains designs. The medicine wheel arrows indicate the connectiveness of everything. The blue represents the Metis people, white represents the Inuit and the great northern landscapes, yellow the diverse prairie ecosphere, red the Missing and Murdered Indigenous Women and Girls, and the green represents Saskatchewan and our grasslands.

“We spent a week designing different things. We wanted to create something that made you proud of who you are,” said Constant, a member of Sturgeon Lake First Nation.

Constant explained that the medallions took about six weeks to complete, which she juggled between work and completing her Masters in Archaeology at the University of Saskatchewan.

“These medallions have a lot of meaning in what they represent to people here, but also represent to me sharing my culture and being an Indigenous archaeologist in this world.”

“It's totally understandable the event was cancelled,” said Sunchild. “The only downside is that I was excited to see our pieces showcased on live TV.”

“Of course it was disappointing at first, but you have to think about the implications,” added Constant. “I'm glad they will still receive them and understand the meaning behind them.”

Wasacase-Lafferty said the committee is still planning on presenting the medallions to the artists, packaged with a video message from everyone involved in its creation.