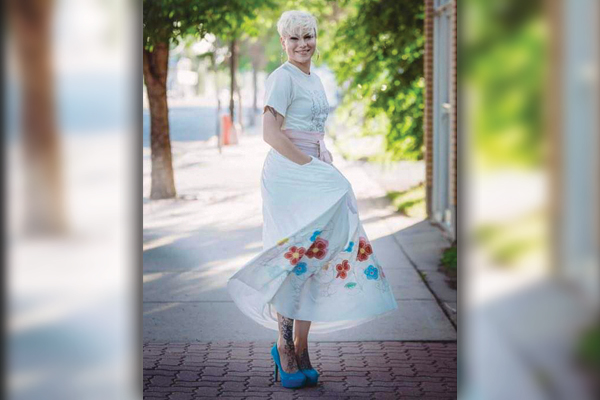 Courtney-Dawn Anaquod from the Muscowpetung Saulteaux Nation is living the dream to be a runway model and has been nominated as Indigenous Model of the Year in Saskatchewan’s International Indigenous Fashion Week (IIFW) Inc.

“I’ve always had an interest in modeling. It has always been a dream of mine ever since I could remember,” she said.

When Anaquod was a teenager, there were tryouts for modeling in Regina, where she was chosen to be in a commercial. She was invited to sign up with a modeling agency but couldn’t afford the $900 fee. Her father had worked hard to try to get the money for her but couldn’t come up with it either. He then told her something that still resonates with her to this day.

“Don’t worry my girl. Your time will come when you want to be a model. Don’t rush life and let that time come to you,” she said echoing his words.

“In 2019, that time came to me. I caught the eye of Christine Tienkamp of SS River Designs. It was through a jigging workshop that I had done for her.”

Tienkamp said she liked how Anaquod presented herself at the River Road Festival in St. Louis, Sask., last year.

“When Courtney approached me, she was so professional and poised. She dressed professionally and conducted herself with confidence, she was genuine and committed to her dance troupe,” said Tienkamp. “I knew that she would be great to model for my clothing line, SS River Designs, as she has a unique look, she is gracious and friendly, truly beautiful inside and out.”

Tienkamp added that Anaquod is humble and yet she takes the opportunities to share her gifts, which is why she nominated her for Model of the Year.

“She is a role model for all young women… and I truly hope she gets some recognition from that event. I am confident she will continue to be successful at modeling and be on the international stage at some point,” said Tienkamp.

“She is always happy to share her story and her journey. I know that wherever life takes her, she will use it as a stage to communicate a positive story for youth and other women.”

During Saskatchewan Fashion Week in 2019, this was Anaquod’s modeling debut, which opened a lot of doors for her.

Since then, international designers started reaching out to her.

“It was another dream to be in a movie,” Anaquod said.

“It’s not just playing the leading role or the main character, it was just the feeling that I got to be a part of a big movie.”

Anaquod is also a jigging instructor and has been known as the dancer who can jig in stilettos.

She also runs a group called Qu’Appelle Valley Square Dancers, which has performed throughout Saskatchewan and Alberta for the past three years. She created the dance group in honour of her late grandfather, Morris Anaquod, who was a fiddle player champion. He and her late grandmother Theresa are her biggest inspirations.

Throughout all her life achievements, Anaquod always had the love and support from her late husband, Dale Shatilla who died suddenly February 25, 2020.

“He believed in me so much, in pursuing all of my dreams and to never give up and to always keep pushing myself,” she said.

Voting for the competition ends on Wednesday, October 21. Winners of the first Indigenous Arts & Fashion Awards event will be held virtually on October 24 on the IIFW Facebook page.

If Anaquod wins the competition, she will be on her way to model in New York City, to walk on the runway during Fashion Week of September 2021, and to have the opportunity to have a professional fashion photoshoot.