Kinistino: a life-long love of the arts and performance 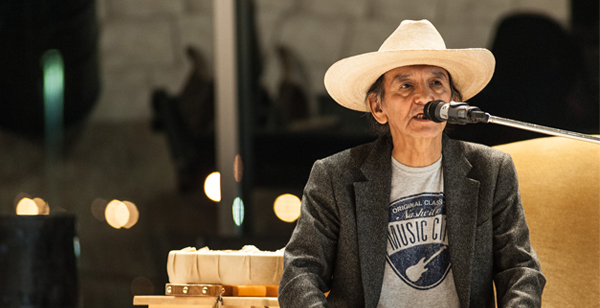 From theatre to North of 60 to the community hall, Errol Kinistino has done it all. Photo submitted

Errol Kinistino had spent decades honing musical performance, acting, theatre craft and behind-the-camera production skills by the time he was discovered for the role of Leon Deela in the long-running television series North of 60.

Kinistino is a member of Ochapowace First Nation and has family ties to Chief Kahkewistahaw, the first signatory to Treaty 4.

He is the second eldest of nine children born to Rosalie (nee Belanger) and Lawrence Kinistino, who sometimes worked in the Alberta sugar beet fields when Errol was in primary school.

He spent a couple short stints at residential school and attended a one-room day school at Ochapowace, before high school.

His parents had been traumatized as children at residential school and were afraid to teach the children their language, so Errol heard only snippets of Michif and Saulteaux. Whenever his grandfather visited, “he would always be singing” traditional drum songs.

His parents often took the family to Standing Buffalo Dakota First Nation’s annual Sioux powwow, to see dancers and drummers, many of whom traveled from the U.S.

“The power of the drum was enormous,” and the dancers inspired Errol and his sister to make their own regalia. He was eventually initiated into the Grass Dance.

He was already playing the guitar and in the thrall of the drum and dancing by the time he attended high school in Grenfell, where the English teacher, Lillian Mitchell, ran a glee club that opened up a whole new world of music for him.

The students learned to sing 16th Century madrigals and Handel’s Hallelujah Chorus, along with popular songs, like the theme from the 1970s movie Love Story.

In grade 12 he was admitted to the exclusive Fireside Club, whose advanced members sang the solos.

Kinistino went on to take ballet at the University of Saskatchewan, which further opened his appreciation for the performing arts. He hadn’t intended to take dance but had registered too late to get into a drama class.

By chance, a ballet production of the Ecstasy of Rita Joe traveled through Saskatoon that year and he attended, with his deepening understanding of the work and skills of the many people who create such works. Years later, in 1982, he played the role of Jaime Paul in a Winnipeg production with Margo Kane as Rita Joe.

That was years after the summer of 1975, when he attended a six-week acting program with the Association for Native Development in the Performing and Visual Arts (ANDPVA) at a farm near Toronto.

During Kinistino’s training, the group created a production, which they staged at Toronto’s fabled Bathurst Street Theatre (now the Randolph Theatre). A special guest at the play was the Oscar-nominated actor and poet Chief Dan George.

“Of course, we all got our pictures taken with him and he said he liked our show.

We were just learning, and it was like being in the centre of the world,” he said.

“I was drawn to the arts and storytelling… I would go to these shows. I loved the culture. I could identify with the characters.”

He became aware of the art of theatre lighting, costumes and props and was mesmerized by the power of these elements to create worlds.

“They took us on this story… What a powerful way to get a message across.”

In 1992, Kinistino was working at Ochapowace when he drove a vanload of teens to a casting call in Regina for North of 60, where a woman told him they were looking for adults too. The next day, he auditioned in a scene that had an inebriated Leon being arrested and trying to take a swing at the new cop.

He was called to a further audition in Calgary, borrowed money from the chief to travel, and found himself up against two well-known actors for the role: Jimmy Herman, who had been in the Hollywood hit Dances With Wolves, and Gordon Tootoosis.

“And I’m this lowly little Indian. ‘I’ll never get this part, these guys are big name actors already.’ That’s what I’m thinking in the back of my head.

“And Jimmy tells, me, ‘Hey Errol. Just do the best you can. You never know what these crazy white people are going to do.’”

A week later, he got the part. They had already cast Tina Louise Bomberry as Rosie Deela and reckoned no one would believe tall Tootoosis could be bullied by her and Herman was too old to be her husband.

“They thought, ‘Oh he’s a little shorter. He looks like he’s a guy that could get hen-pecked and bossed around by a strong woman.’ That’s why I got the role.

“But I didn’t care. They were going to keep me for four episodes and I ended up playing about 54 episodes and it was the experience of my life.”

The show ran five seasons and was syndicated in more than 80 countries. Kinistino also acted in one of the North of 60 television movies that followed.

He’s pleased that APTN has picked up the series.

“I looked so young… It was exciting. We got to represent Canadian Culture.

“The team of writers were so good. They put their heart and soul into their writing.”

Kinistino later had a recurring role in Corner Gas and has appeared in other television roles.

He continues perform in theatre and live music, with his partner Josie Linka.