Kohkoms back with another Rez Christmas classic

“It’s wonderful to have our own holiday tradition, reflecting stories from the community that share important messages about family and friendship during the holiday season,” said Peeteetuce. “Christmas was always magical and exciting as a child. Then you lose that growing up, as if something is missing. The kohkoms of Kiwetinohk have a way of bringing humour and heart.” 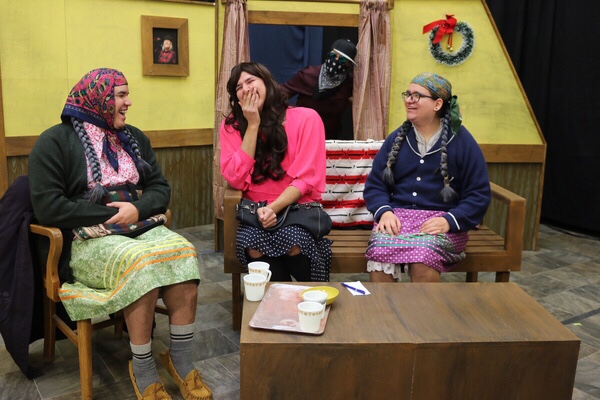 Featuring the Three Kiwetinohk Christmas Kohkoms in a Rez riff on the film “Home Alone”: Front: Dalton Lightfoot as Zula, Danny Knight as Clare Bear, Cory Dallas-Standing as Sihkos, and Back: Krystle Pederson as Roger and other characters.

First-time director and longtime stage manager Aaron Shingoose said he hopes audiences walk away with a sense of warmth and appreciation for their own loved ones, the focus of the holidays.

“It’s certainly an eye-opening experience on the other side of production value, pulling everything together,” said Shingoose, who began as an actor/2007 graduate of GTNT’s COV (Circle of Voices). “Just the heart of this story, there’s a lot of touching moments in it; the sense of community and kinship that really comes with these Kohkoms and these characters’ stories.”

Part of the comedy is the cross-dressing: the Kohkoms are played by males, while this year the male roles are mainly played by Krystle Pederson.

“I think this is my 9th production, I did this one back in 2004 and played Sihkos,” said Pederson. “Getting to play Roger and different characters...there’s been this struggle between guys trying to be girls and girls trying to be guys — trying to sink into the “man” of who my characters are.”

It was Danny Knight’s first time being a Kohkom, and he said it was both fun and hard work. “There’s a lot of unexpected things that go along with being a Kohkom that you’re not ready for, and it’s not even being a real Kohkom it’s being a pretend Kohkom,” laughed Knight. “A good tip is learning how to keep your knees together, to live in your hips...tapping into the right kind of sensual that Clare is — sensual, not sexual — that’s been fun and tough.”

“I’m playing Sihkos this year, who gets left behind when Clare and Zula go off to do some shopping, and while Sihkos is home she reflects on her late husband and the grieving process. Then some robbers show up and as the no-nonsense Kohkom, she’s going to put those robbers in their place: that’s where all the comedy comes in,” said Cory Dallas-Standing.

“This is my fourth year doing the Christmas show,” said Dalton Lightfoot, who played Zula. “It’s really bringing the community together, there are a lot of hardships that go on around Christmas time. It’s just a way to bring release to communities that otherwise wouldn’t get to see a Christmas show — we go on tour and see the communities where a show wouldn’t otherwise be accessible to them.”

“I’m so filled with happiness knowing these stories bring joy at Christmas time,” said Peeteetuce. Don’t miss out on a Christmas classic!