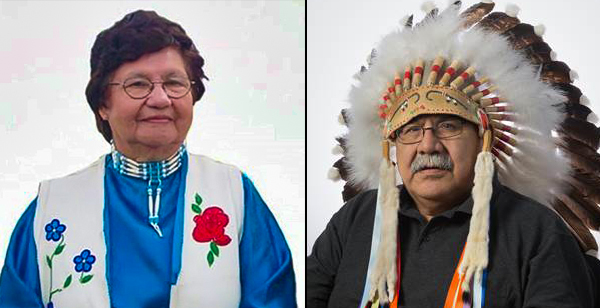 First Nations leaders in Saskatchewan are mourning the deaths of Theresa Stevenson and Ron Michel, long-time public servants who were senators for two Indigenous organizations.

Stevenson was a senator with the Federation of Sovereign Indigenous Nations (FSIN) after operating Chili for Children in Regina since the 1970s. The FSIN announced her death on January 26, along with former Peter Ballantyne Cree Nation Chief Ron Michel.

“She was a person of prayer; she was very compassionate from all the years I could remember her,” said Theresa’s son, Greg Stevenson.

“She had a heart for people and she knew there were children in Regina who were not eating,” he said.

The City of Regina approached Theresa about 45 years ago to prepare lunches for children in the area and the program was created as part of the Regina Indian Community Awareness organization.

Theresa was a well known figure in the Regina Indigenous community. She retired about 15 years ago.

Greg Stevenson, has been executive director of the program for the past 10 years but he was around it with his mother most of his life.

“This is my mom’s story now, she said on the first day, she went and she invited 10 little boys to come and have lunch. They came and she told them to bring some friends back tomorrow. The next day there was 20.”

Stevenson said it snowballed after that and grew into the program it is now. His mother’s philosophy was that no one was going to take care of First Nations children except for First Nations people.

Chili for Children was providing lunch for 870 kids per day across three schools in Regina’s North Central neighbourhood prior to the COVID-19 pandemic being declared in March 2020. The program shut down for a month but started up again in May through August and provided 200 sandwich bags to those in need on Thursdays.

Stevenson received the Order of Canada in 1994. She was also a member of the FSIN senate, positions within the organization for First Nations leaders with experience and knowledge of Canadian politics. Stevenson was from the Cowessess First Nation, near Regina.

Bobby Cameron, chief of the FSIN, spoke to Eagle Feather News on Wednesday about Ron Michel, a former senator for the Prince Albert Grand Council.

“[Michel] was a teacher, an advisor, a friend, a buddy -- he was a person that we looked up to,” said Cameron.

Stevenson and Michel were senators of their respective organizations, roles given to First Nations leaders who have experience and knowledge in Canadian politics.

Michel spent 12 years as grand chief of PAGC and 20 years as chief of the Peter Ballantyne Cree Nation. He was 69.

Cameron described Michel as someone who liked to laugh and tease, with a big sense of humour, and who was all about supporting the community.

“It was always good to be around him because you knew you were going to have a good visit and a good laugh,” Cameron said. “We’re going to miss him.”

Cameron said one of Michel’s dreams was a First Nations hospital in Prince Albert on urban reserve land, an especially important goal because of mistreatment of First Nations and other Indigenous people in health care.

“It happens every single day to our Indian people in the hospitals and the health care systems,” Cameron said.

“This is why the grand chief has pushed and advocated for their very own First Nations hospital. We hope to get there one of these days.”

Michel instilled a sense of commitment and drive to improving the community in those he worked with, Cameron said.