How do we make space for our spirituality and traditions in a changing world? This is one of the questions at the core of the upcoming play at the Gordon Tootoosis Nikaniwin Theatre, Two Indians.

“I wanted to write something that grappled with the idea of who we are as Indigenous people, and who we are when we're not in our home communities. What does it mean to claim space?” said Falen Johnson, playwright behind the play.

Two Indians tells the story of two cousins, driven apart by tragic events, who reconnect after years apart through culture and ceremony. Johnson, who grew up in Six Nations reserve in Ontario and has spent the last several years living in Toronto, draws on personal experience to explore how life on reserve and life in an urban setting exist both in conflict and in harmony. 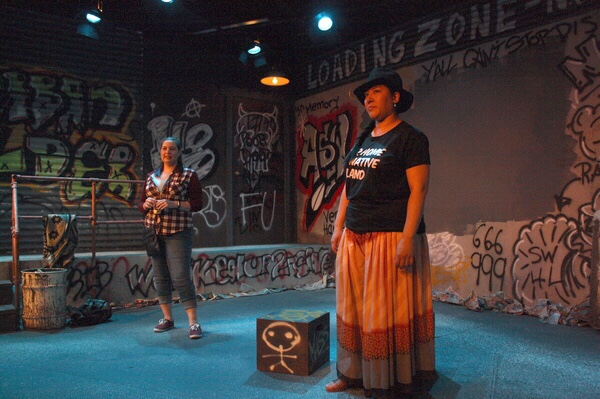 “I think, as Indigenous people, we are in a great transition – our ceremonies and the way we relate to them changes all the time. I'm fascinated by that and how we hold on to these things while moving forward,” she said.

Johnson added she wrote the play in response to the Idle No More, which fuelled her to dig into questions of identity, as well as self-express through art.

“I had a lot of feelings going on during (Idle No More),” she said. “Canada has done such a good job of erasing things – the genocide is so British here, so polite and quiet. So, playwriting is a way of feeling like I’m commenting on it and being heard.”

Watch a scene from Two Indians:

Despite its serious subject matter – the play existing in the same world of missing and murdered women, truth and reconciliation, occupation and resistance – Johnson insists that it’s not all heavy.

“I want to use humour to crack people open. Then, once they’re open, you can start teaching them things. If you can get them to laugh, they’ll listen,” she said. “That’s really what I’m trying to do with my work – if I can make you laugh, then you’re listening.”

One of the actors tasked with occupying Johnson’s world is Saskatoon-based actor Andrea Folster. Folster, a graduate from University of Saskatchewan’s Drama Department, said she immediately responded strongly to Johnson’s play.

“It was really powerful, that first table read-through. I felt so understood and engaged,” said Folster. “Those kinds of scripts from women playwrights don’t fall in your lap everyday.”

Folster said the experience of acting in a play written from an Indigenous woman’s perspective is rewarding. She hopes Two Indians is able to encourage others to share their story.

“The more you see yourself reflected on stage, the more you, as an audience member, feel that you can go out and do that yourself, create and tell your story. I think it’s really important for Indigenous youth, or people of any age, to feel like they have a story worth telling,” said Folster.

It was exactly these kinds of personal narratives that Johnson said she “inhabited” to write her play, and similarly, hopes the audience walks away with.

“I want people to see their family dynamic, too. I want to leave the audience feeling like they want to call one of their cousins.”

Two Indians runs May 30 to June 9 at Gordon Tootoosis Nikaniwin Theatre in Saskatoon.