How do you sum up over three decades of artistic work? Wanda Nanibush, Indigenous curator of the AGO (Art Gallery of Ontario) calls this Rebecca Belmore retrospective at the Remai Modern, “Facing the Monumental,” an exhibition “that really grapples with the monumental issues of our time” using art as a response to the kind of human beings we want to be and where we want to go as a society.

The show opened February 1st at Remai Modern in Saskatoon with an artists’ talk by Belmore and Nanibush at 7 pm, and an 8:30 performance by Eekwol and T-Rhyme, and includes photography, sculpture, media installations, and one very special feature to Saskatoon: the outdoor Neil Stonechild ice sculpture, “Freeze” which is iceblocks with the letters of his name within, installed right outside the doors of the Remai for everyone to see until such time as it melts. 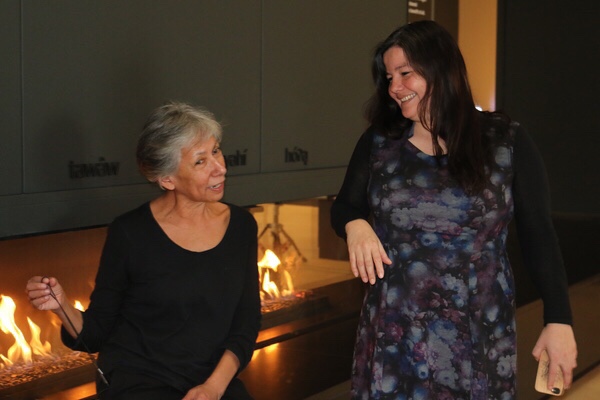 Rebecca Belmore retrospective at the Remai Modern, “Facing the Monumental,” opened February 1 and runs until May 5.

“It’s the first time for it to be in Saskatoon,” said Nanibush. “We called Neil’s mom and she was really happy that we were doing it, it was really important to get her permission. She sees it the way we see it, honouring Neil Stonechild and making sure we don’t forget his name. His death launched the investigation into the Saskatoon police and we can’t forget it was his death that made that happen.”

Bringing that particular exhibit “home” to Saskatoon - it has been in three other locations, twice in Ontario and once in the US - meant being able to ask questions like “how much have things changed?” with the death of Colten Boushie, Indigenous interactions with the policing and justice system, and racism embedded in all these systems. On Tuesday February 5th, there will be a fireside chat led by Lyndon Linklater at the Remai, open to all, discussing policing in Saskatoon along with Police Chief Troy Cooper, Angela Daigneault, and Darlene Brander.

“I hope that people really open themselves up through the exhibition and think about our role in the perpetuation of a lot of injustice, and also our role as witnesses to this history, and our role as people who can really change things,” said Nanibush.

On Friday, March 1st at 7 pm two artists will respond to the work of Belmore, and every subsequent Friday in March there will be films screened which were selected by Belmore and Nanibush, including Two Worlds Colliding, Tasha Hubbard’s film about Stonechild.

“This was a work made in collaboration with my husband, Oswaldo Jiro,” explained Belmore of the Stonechild installation, “Freeze.” “For us having it here outside the Remai is very significant because it feels like it’s coming home. This is where the work really belongs and where it should be seen.”

Belmore talked about the retrospective being in part about the land and ownership of the land, poverty, and how in cities it’s more difficult for people to have homes now. Another room has performance works about the buffalo, missing and murdered women, residential schools, resource extraction, and other topics. Another room contains her piece about the Boxing Day massacre at Wounded Knee, a giant white quilt over a white quilted chair that has bloodstains at the top of it.

“It’s not an easy road to take, being an artist, it’s hard work, but there’s lots of ways to get your work out there, and you have to,” said Belmore, when asked for advice for other artists.

Belmore’s work provokes, informs, questions, examines, reflects, and creates space for dialogue and paradigm shifts. The show will run until May 5th with many activities planned on Tuesdays and Fridays at 7 pm.