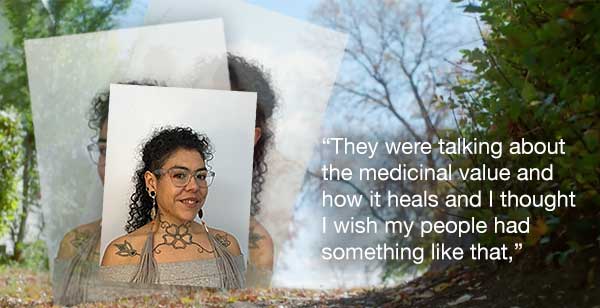 Sometimes a tattoo is more than just ink – it’s a statement. Regina-based tattoo artist Stacey Fayant says they can be a symbol of where a person has been, who they are and where they are going.

As a child, Fayant was always drawing and asking her parents for art supplies.

Her talent was so obvious, in secondary school, her teacher noticed and gave Fayant her own space to create.

“He gave me space in the art room that was just for me,” said Fayant. “He encouraged me to keep making art.”

“I got a shop tattoo at 18 and that was all I had,” said Fayant. After a life-altering event Fayant saw a documentary on traditional Indigenous tattooing in the Philippines.

“They were talking about the medicinal value and how it heals and I thought I wish my people had something like that,” said Fayant. Coincidentally, not long afterward she seen a Facebook post about traditional North America tattoos.

So, she started researching and discovered Earthline Tattoo Collective where was accepted into a training program in early 2019.

Fayant was trained in a mix of traditional practices, health and safety measures – but really enjoyed learning about the tradition of tattoos in North America.

“Specifically with tattooing, colonizers did a good job of making it taboo, talking about [tattoos] in terms of something savage and something evil,” said Fayant.

This is why she chooses not to do tattoos in exchange for money. “Our people have been through so much in terms of colonization,” she said. “I feel that because the tattoo was taken from us in such a way that it was even forgotten about … it’s important that it is available for our people no questions asked (as a way) to revitalize it.”

Although she has done a variety of tattoos over the years, traditional face, neck and hand tattoos are what Fayant predominantly focuses on.

Fayant said it’s an empowering experience to give someone a face tattoo.

“It’s a huge honour to me. I think of those people as warriors who are walking strongly and boldly through this society.” she said.