George Gingras thinks of himself as a fairly quick painter, but you can see that hours of work combined with years of training have gone into his upcoming MFA exhibition.

“I call the show and thesis “Magnificent Lore”,” he explained, and it is obvious why upon examination. The vibrant paintings are filled with animal and humanoid figures in various settings and processes of transformation, frequently along with serpents and sometimes even musical scores overtop of scenes.

“This painting has the Red River Jig scored over top — if you add or imagine the five bar lines, you should be able to play it.” 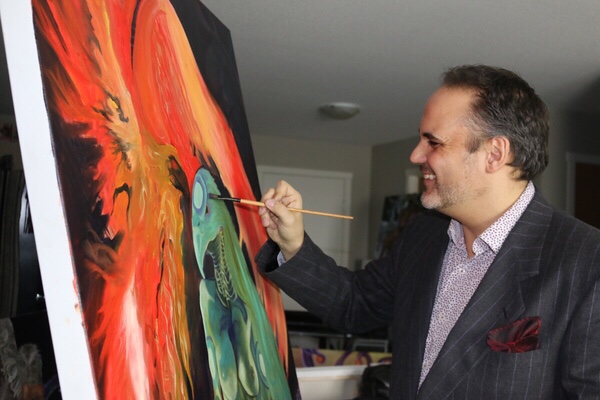 In another painting, a song is scored over top of the serpent body that is on part of the canvas. Other paintings feature shapes and figures which have to do with science and biology — double helix and DNA and neuron receptors, but blended with lore and mythical figures of the imagination and oral tradition. Many incorporate spheres and lines which Gingras says were in part inspired by the work of Indigenous artist Norval Morriseau. Gingras calls his painting style “Imaginative Realism” and draws upon the lore of Indigenous, and especially Métis, tales and teachings. He also credits Ukrainian and French inspiration alongside Indigenous inspiration. Characters such as Ti-Jean, mermaids, Li Jiable, and Rougarous are explored, along with the frequently present serpents who represent healing. Some paintings are inspired by legends and stories, others by dreams and visions. He also cites quantum physics, philosophy, and post-modernism influences. Most canvases depict the human physique, both male and female, something Gingras credits to his initial background in martial arts and bodybuilding.

“The passion for bodybuilding fueled my interests in life drawing,” he noted. “Predominately, the creatures/beings I portray are largely influenced through oral storytelling and publications of historical and current records of Métis heritage.

“Other influences include Métis art/artefacts, Michif history and linguistics, and experience with curriculum developers, historians, teachers, and Elders.”

In his youth, he was inspired by cartoon worlds like He-Man, Thundercats, Transformers, and Dragon Ball. Encouraged by his supervisor, Dr. Mary Longman, with whom he had studied Indigenous Art History while doing his Bachelor of Fine Arts, he has created works of art which incorporate his early influences and life experiences along with life drawing and his “imagined realism” the likes of which would be hard to find elsewhere.

“Not only many hours but a lifetime of learning, listening, research, and observation has gone into all of this work,” agreed Gingras, as he finalized details on one of the larger canvases.

The entire series will be displayed on campus at the Gordon Snelgrove Gallery from January 29th to February 9th, with an opening reception on February 3rd from 1 - 3 pm. The show and reception are free and open to the public.