A 30-year-old man from the Ahtahkakoop Cree Nation who joined the military in 2006 and served in various countries was given the Order of St. George for his service and commitment. 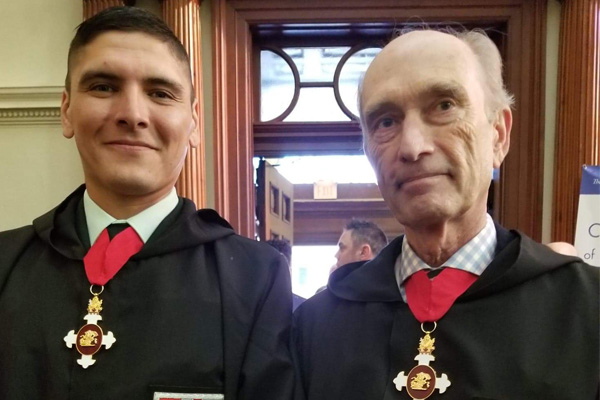 Master Corporal Mahekan Ahenakew and Lord Robbie Sprules on his special day where he was Knighted in October 5, 2019. Photo supplied by Sekwun Ahenakew

Many years ago, Master Corporal Mahekan Awasis Ahenakew attended a powwow in Regina and was intrigued at the veterans during a grand entry ceremony. The curiosity of the military lifestyle sparked right then and there.

“It was something I wanted to learn more about,” he said. “After the grand entry was over, [I walked around] and saw a recruiting booth. I went over to inquire about it. That’s when I had gained contact on where to go to join the military.”

Not long after, Ahenakew was contacted and went through testing to see if he was fit to join. Following the testing, he decided to join the Bold Eagle Program which kickstarted his career in the military.

“I carried on from there forward and I’ve done a lot of courses,” he said.

Ahenakew’s late grandfather was in the military as well. The thought of one of his relations who served for his country always stood at the back of Ahenakew’s mind which kept him going down this career path.

“I’m carrying on his footsteps…to carry on that legacy of warriors within our nations,” he said.

Ahenakew said this career came easy and natural to him but doesn’t mean he didn’t face any challenges along the way. Being apart from his family is one the hardships he faces. But despite the challenges that come with the job, he is grateful for the hardships especially when he goes back home.

“I never get tired seeing my family. Every time I see them, it’s a wholesome experience and I’m sure grateful for them everyday of my life,” he said.

His sister Sekwun Ahenakew describes her brother as someone who has repeatedly shown a level of genius through his creativity and functioning. “I see my brother as a person who appreciates his mode of inner genius that involves trusting those inner flashes of insight that are worthy of expression,” she stated in an email interview. “He banishes doubt by setting his mind to it – whatever it may be.”

She added that he trusts in the wisdom and stays connected to Creator, appreciates the genius in others, practices radical humility and doesn’t like to take credit for his talents, intellectual abilities, aptitudes, or proficiencies.

“He gives credit everywhere except his ego. He tends to pay attention to the greatness he observes in others. He tells others of their own greatness,” she stated. “It took much convincing for him to accept this investiture into the Order of St. George. He remains humble while staying in a state of gratitude.”

Ahenakew said he doesn’t see himself in another job where he would be able to affect a diverse and vast population in a positive manner through his own blood, sweat and tears.

“The greatest capacity that I ever had to help people that I personally do not know, on the grandest of spectrums, has been made available to me through the Canadian Armed Forces,” he said.