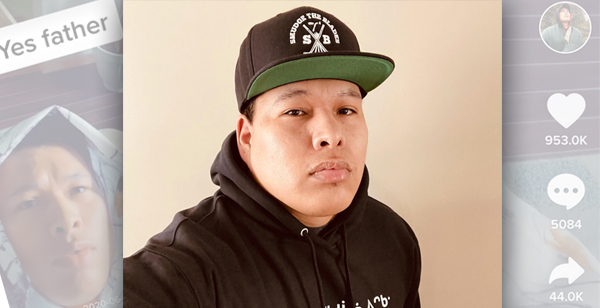 Brett Mooswa surprised himself with his massive popularity on TikTok. Facebook photo supplied

Brett Mooswa likes to make people laugh. His 383,000 TikTok followers would agree. And with over 3.7 million views of his viral TilkTok of “When a native is born,” the soft spoken, gentle giant from Makwa Sahgaiehcan First Nation has become a TikTok star with his short, humorous takes on First Nations life.

The humour and the hundreds of thousands of followers began because of a prompt from a friend.

“I didn’t even know about TikTok until just over a year ago,” said Mooswa in an interview with Eagle Feather News. “But I had put a couple videos on Facebook and my buddy thought they were funny and said I should get TikTok. I thought it was all just people dancing and whatnot. I posted a couple videos, and I was surprised that people watched it and commented that it made them laugh. Then I saw a bunch of Indigenous creators on there. Sherry McKay is a big influence, and I was encouraged by these creators getting good feedback from others.”

His first TikTok was in February of 2020 and showed a kid grow into a mushum. It has garnered 24,000 likes and 264,000 views. If you tune into Mooswa’s TikTok page you will see his tag line Laughter is medicine. And he delivers lots of it.

“My stuff comes from everyday life. When you grow up seeing certain things and are around people who share the same humour as you, you don’t give it too much thought. These things are ingrained in you to always laugh and share that laughter,” said Mooswa. “In the Indigenous community it is very important. Especially if someone is experiencing loss. Humour is one of the ways that we heal in our society. It is a natural thing for me to do. It is very common in our reserves. This sense of humour. Everything I do I just exaggerate to a degree and give it a humorous approach.”

Mooswa isn’t one to spend hours writing a script and laying out his short videos. He does it off the cuff and most of the time with only one take. And he has tons of material in his head.

“I don’t plan my videos. Everything just happens then and there. I do not write things down. It just happens when I’m sitting down or driving and an idea will pop in my head and I try to do it right away or I forget about it,” said Mooswa. “That’s a bad habit I have, and I tell people to take notes because I have lost a lot of golden ideas that I have forgot about.”

Most of his videos are shot by himself holding and talking to his phone. He has bought a tripod now, which helps, but most are him, the phone and humorous magic.

“You don’t need anything fancy, just your phone, your arm and good ideas,” he adds.

Mooswa, 30 years old, has a full-time job in the trades and has two children, Charity and Praise, with his wife Thea. Residing on Makwa Sahgaiehcan First Nation allows him to be ten minutes away from his passions of hunting and fishing and he loves working out at the gym to relieve stress.

That resume does not sound like it would lead a fellow to have hundreds of thousands of followers and over 5.8 million likes on TikTok and that has amazed Brett.

“It blows my mind, and I don’t think I will see the day when it doesn’t,” he said of his following. “It is surreal. I’m just a man living on a reserve of 2,000 people. It still amazes me and I’m still thankful for the people that watch me and like my stuff. I’m thankful that people see me as an influencer. It is an honour and I don’t take that lightly.”

For now, TikTok creators in Canada cannot make money off their videos unless they get a sponsor or do ad promotions. But Mooswa does not do it for money or glory.

“I do this to make people laugh and heal. Sure, it would be nice to make money off it, but I personally have healed through humour,” said Mooswa. “Laughter raises your serotonin and makes you heal. I am now speaking at conferences and have had youth say that my videos have helped them. Maybe this leads to me becoming an actor or voice actor or speaking at events. I love challenging myself and I love sharing laughter.”