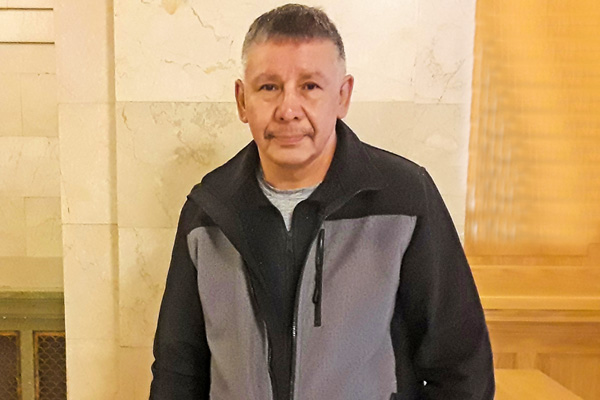 Afterwards, Mitsuing expressed his disappointment with the provincial government’s delays to act and emphasis on short-term solutions.

“Things are happening now – they can’t wait anymore,” he said. “Kids are losing their lives, and if they keep waiting, it’s going to happen again. These kids need help and they keep making excuses not to do anything.”

Currently, nearly a dozen Saskatchewan Health Authority (SHA) crisis workers are among the support people at Makwa Sahgaiehcan, as well as trained responders from the Meadow Lake Tribal Council, but most will not be staying with the community.

“We got help, but it’s just short-term right now,” Mitsuing said. “Some of them are going to be leaving tonight.”

Going forward, Mitsuing hopes the government will support interventions like training programs within the community.

“We should be sending in some suicide prevention trainers to come and train our people on how to assess these kids … and how to talk to these kids [and help them] open up and change their minds and their thoughts, to prevent them from thinking like that and see the signs,” he said. “Because nobody’s trained, in our community, for these things.”

Kaeding acknowledged the importance of the community’s desire for long-term and sustainable mental health and suicide prevention services but says the government has been focused on providing an expedient response while the crisis is ongoing.

“Our task at hand is to provide immediate help, and that’s what we’ve done,” said the minister. “We need to just try and get things under control now and provide immediate relief, and then … talk about what some of the medium- and long-term plans could be.”

For Chalifoux, Tuesday’s meeting was the beginning of a conversation between the community and the government, rather than the final word.

“At this time, things are still preliminary in [the province’s] response,” he said. “We’re hoping that, when we get back, we’ll be able to start writing up some more letters and look forward to some additional response.”

Mitsuing emphasized that this crisis is not limited to Makwa Sahgaiehcan.

“It doesn’t stop with our nation,” he said. “It’s the whole province – it’s all over. Our first communities are suffering and they need help.”