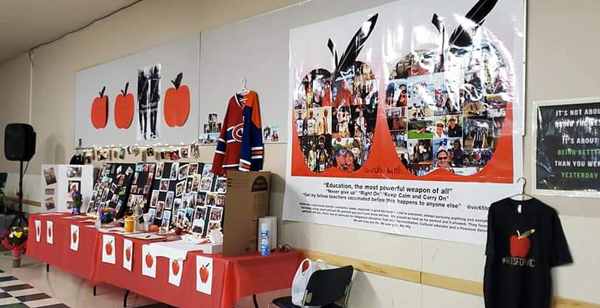 Teachers at the city’s largest high school are working to raise $20,000 to establish a legacy scholarship in their colleague’s name and Prince Albert Mayor Greg Dionne has said he will bring forward a motion to city council recommending a city park be named after the late Cree educator.

Since his death, the outpouring of condolences in Prince Albert and across the province has been tremendous.

For almost three decades, Thunderchild mentored and influenced hundreds of students who passed through the halls of Carlton, where he taught.

He used his Cree language and culture as a way of reaching out to Indigenous students who didn’t always feel at home at the school.

Sheryl Kimbley is a close friend of the Thunderchild family.

She said he always looked for ways to brighten the day of students who weren’t doing so well and this is why few ever forgot him.

“Victor has a string of people behind him that you can’t even imagine,” she said. “That he just smiled at. That he just put a hand on their shoulder and said, ‘You’re going to be okay. What do you need?’ He was that person for these students wandering the big halls of Carlton.”

Carmen Fourstar is one such student.

While attending Carlton in the late 1990s, she felt out of place until she enrolled in his Native Studies class, she said.

“In many of the classes I was the only Aboriginal person,” she said. “And I faced racism on a daily basis and the teachers wouldn’t do anything about it. And sometimes I faced it from the teachers as well. Now, with Victor, every Native Studies class, he always played round dance and powwow music. When you are part of that life, like myself and my children are, and you’re exposed to an institution where it’s not accepted, and you go into a classroom out of that entire building and you’re accepted, it gave me a huge sense of pride,” Fourstar said.

One of the biggest things Thunderchild did to influence Indigenous students during her time at Carlton was starting a traditional drum group.

This drum group carries on today and Fourstar’s son, Brock, who is a currently a student at the school, is part of it.

Thunderchild’s daughter, Renee, said her father made a conscious decision early on to teach at a non-Indigenous school because he thought it was where he could have the most influence.

“He decided to stay at Carleton, a non-Aboriginal school, because he knew the number of Aboriginals that went to that school and they did not have the support,” she said. “He knew that he could go off to the reserves and make more money but he didn’t want that because his true passion was trying to teach and reach out to the youth.”

Thunderchild mentored Indigenous students in any way he could. Besides organizing traditional activities, he took an active role in coaching sports such as volleyball and softball.

In his later years, Thunderchild worked as a guidance counsellor at Carlton and in fall 2020 he spearheaded a program to teach the Cree language to kindergarten students at John Diefenbaker Public School in Prince Albert.

In one of his final public statements on Twitter, Thunderchild was critical of Premier Scott Moe and the Saskatchewan government for not prioritizing teachers for COVID-19 vaccinations.

Victor Thunderchild is survived by his wife Violet, children Jeremy, Renee and Ryanda, his mother Mary Thunderchild, two grandchildren and a number of siblings.