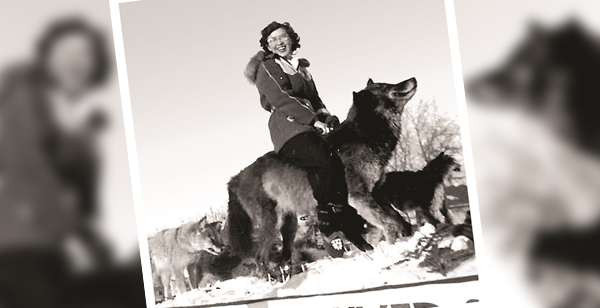 Darleen Lenore McLaughlin, the writers mom, atop a parade float at the Trappers’ Festival in The Pas, MB, circa 1948. Photo supplied

I frequently find I am explaining that the matriarchy so affiliated with the Métis doesn’t mean women are in charge or that they make all the decisions. This worldview comes from elsewhere. To us, our traditional matriarchy means women’s opinions and women’s roles are highly regarded.

Métis women have always needed to be strong so their families could survive. When I think of the strength of the Métis women who came before me I am filled with wonderment and gratitude. My great-grandmother’s story is one of challenge and triumph. As a girl of nine, Jane Mary Adams, who went by the name Jennie, walked all the way from Manitoba to Saskatchewan behind an ox cart. With nothing more than what the cart could carry, these Métis families re-established themselves from scratch, found a place to live, built a dwelling, and became part of a new community. Métis families had to be self-sufficient. Honing the skills to provide for yourself and your family was the primary education most needed and received.

Marrying at sixteen was common at the time and Jennie did just that when she married Michael McLaughlin in 1887. He was a Métis, also from Red River, with a story all his own. Jennie and Michael lived in the small community of Lindsay District, North-West Territories, an English Métis settlement just 10 km from Prince Albert, Saskatchewan. In my head, Prince Albert is called Isbister.

Just a year later in 1888, Jennie and Michael started their family with the birth of the first of their 24 children. The last child born, Daisy Lenore McLaughlin, my grandmother, was born in 1914. The genealogical record shows that they had sixteen children, but in the oral history of our family, we hear Jennie had twenty-four children. We were told that some of them were miscarriages and stillbirths and that some were twins. Quibbling about numbers seems moot since having sixteen children survive is a remarkable feat unto itself. In those days, children were born at home, often with the help of very capable midwives. With the amount of work required to look after a family of this size, there was very little rest after each baby’s birth. One of the sadder stories is that Jennie lost four children to diphtheria in one week. She had to build the coffins. She made one of them too short. This was a sign to her that she was going to lose another child to the deadly disease, and she did. I cannot really fathom the depth of the grief the family experienced over this loss.

Michael and Jennie began living separate lives after WWI. Jennie lived in Prince Albert for a few years and then made a home at Chitek Lake, SK. It was here that my mother, Darleen Lenore McLaughlin, had the misfortune of being separated from her mother. This brought her the good fortune of being raised by Jennie and her partner, Jim Barrett. She called them Granny McLaughlin and Daddy Jim.

Mom had the best time growing up in the one-room log cabin at Chitek Lake. She was proud of being able to snare rabbits and of having her own .22 rifle at age 9. Jennie was so resourceful that she made Darleen’s clothing from adult clothing. Mom’s favourite pants were those made from Daddy Jim’s pants because Granny McLaughlin had left the man-sized pockets in the pants. This pleased Darleen to no end as those gigantic pockets held all her treasures.

Mom was the grateful recipient of all of Jennie’s stories; about the long walk from Manitoba, the children lost to diphtheria, the plant medicines, the berries to pick, the food to make, and the skills to develop. Mom made sure we grew to love Chitek Lake. Eight of us would stay in the cabin in which she grew up. It was a rare privilege and remains one of my fondest memories.

Jane Mary Adams – Jennie - gave my Mom a great work ethic and the drive to persevere. She enriched her life with Métis ways of thinking, Métis ways of doing things, and Métis ways to laugh and enjoy life. She taught her that real wealth comes from being loved and from feeling safe and happy. I also like to think we inherited the matriarchy. Mom was raised to have confidence in her own abilities and decisions. This made her leadership skills obvious and they were welcomed at a time when visibly Métis women were often without a voice. Thanks, Mom. I am your daughter and proud of it. Of course, an even bigger thank you goes to Granny McLaughlin for her love and influence. Like so many of our ancestors, to many she was an unremarkable woman. To me, she made a remarkable difference.