A teen from the Mistawasis First Nation holds the title of the Saskatchewan Championships at the John Arcand Fiddle Fest (JAFF) going on for four years in a row. 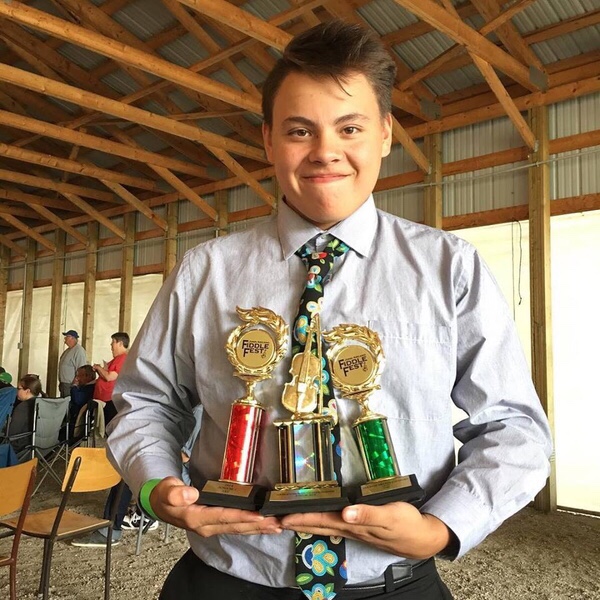 Jordan Daniels, 16, has been playing fiddle for five years and has learned from John Arcand – the fiddle master extraordinaire.

It’s a passion that has been passed down in Daniels family for three generations. He was gifted a fiddle for Christmas one year and had decided to take fiddle classes from Arcand. Since then, he competed in the annual JAFF held in on Arcand’s acreage located on Highway 60.

“Both of my moshums (grandpas) played fiddle and their dad,” said the 16-year-old. “I want to carry on that family tradition.”

Daniels practices to perfect his fiddling skills every day at home. His passion for playing music had sure paid off in this year’s JAFF. Daniels earned three trophies for the Saskatchewan Championships, 1st place in the Junior category and 2nd place in the John Arcand category.

“I thought it was really good. Every year is always good but this year, there were more people from all over the place,” said Daniels. “It’s always good to see everyone there.”

“The attendance was down a little bit for the [weekend] campers who are there for the four days but the day attendance was up,” she said. “We were pretty much on par.”

Arcand said there were many concerts and performances during the JAFF. In addition to the fiddle fest, the Arcand’s also ran the Métis cultural camp at the same time which gives attendees more variety on entertainment during the JAFF days.

“People want more and more. It’s honouring the Métis culture [working] in partnership with the Gabriel Dumont Institute to present the camp during the fiddle fest,” said Arcand.

The JAFF also offered workshops in fiddle, traditional red river jigging, guitar and square dancing for all skill levels from beginner to advanced. In the cultural camp, participants had learned how to finger weave, flat and peyote beading, art workshops and traditional dancing.