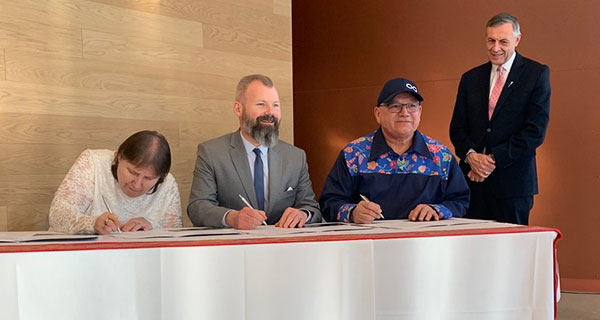 The Metis Nation-Saskatchewan (MN-S) has signed a Memorandum of Understanding (MOU) with the provincial government reaffirming Metis food harvesting rights.

The MOU between the MN-S and provincial government comes almost ten years after an initial MOU, signed in November 2010, regarding food harvesting rights. The MOU signed Wednesday will commit the two parties to future negotiations around recognizing and respecting Metis rights to hunt and fish in Saskatchewan.

“For the first time in our history, we will be able to work with the province to deal with province-wide harvesting rights for the Metis,” said MN-S President Glen McCallum.

“To be able to bring two governments together and to finally sign the document that recognizes the work that we need to do, but more importantly, to be able to work together in a way that together we can better understand who the Metis are,” said McCallum. “It's been a long time coming.”

“Now that we have a government sitting across from us, to be able to hear us out and to clear the path for better understanding, respect, and a working partnership,” said McCallum.

Negotiations on the food harvesting rights have yet to be scheduled, but both parties expressed confidence in finding common-ground at some point in the coming year.

“This partnership is significant and special. It's based on mutual respect (...) by us working together to share, learn, and grow as partners,” said Duncan. “Incorporating Metis hunting and fishing into our provincial management plan will help support conservation efforts for fish and wildlife here in Saskatchewan.”

Duncan said that when the discussion begins, they will start with the staff from both the province and MN-S before proceeding to the ministerial level.

“It's too early to predict what will ultimately be included in the final agreement. We believe that these discussions have the potential to create a province-wide management approach that would be unique in Canada,” said Duncan.