Moment of silence to commemorate Victory in Europe Day 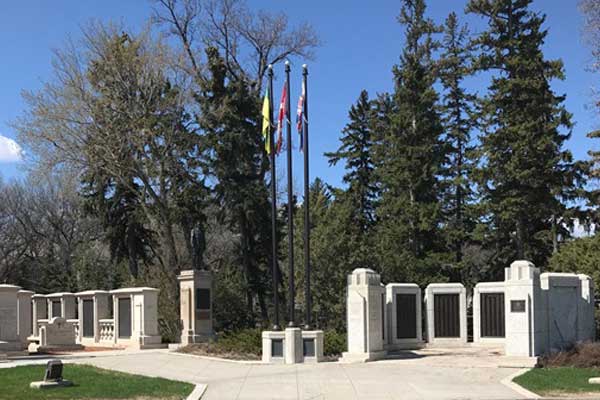 LG Russ Mirasty, his wife Donna, and Premier Scott Moe gathered at the Saskatchewan War Memorial for a moment of silence and each laid a wreath to remember those who served and sacrificed during the war. Photo supplied

The Saskatchewan Lieutenant Governor Russ Mirasty and his wife Mrs. Donna Mirasty, joined Premier Scott Moe at the Saskatchewan War Memorial to commemorate a day that marks the end of hostilities in Europe during the Second World War.

Victory in Europe Day on May 8, is particularly important to Canadians as it largely marked the end to fighting for Canadian Forces after nearly six years of war, according to a prepared statement.

“On May 8, 1945, the Allies accepted Germany’s surrender and after six long years of fighting, the Second World War came to an end in Europe,” Mirasty said in a media release.

“As the year's pass, it becomes increasingly important that we remember the Canadians who served. We owe them our deep gratitude. Please take a moment today to remember them, and to honour their legacy of peace.”

While remaining physically distant, the Lieutenant Governor, Mrs. Mirasty, and Premier Moe gathered at the Saskatchewan War Memorial to remember the service and sacrifice of the sailors, soldiers, and air personnel during the war.

A moment of silence was observed while a trumpeter played the “Last Post” and “Rouse.” Following this, the Lieutenant Governor and Premier Moe each laid a wreath at the war memorial.

“We recognize the tens of thousands of men and women from this province who contributed to Allied success both at home and abroad, most importantly the more than 5,000 Saskatchewan residents who paid the ultimate sacrifice in the pursuit of peace.”

To find out more about the Saskatchewan Virtual War Memorial, visit www.svwm.ca.