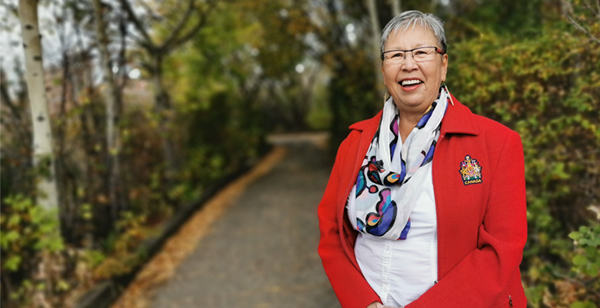 Who am I? I am Eva’s daughter.

I’ve been fortunate to have been born with a darn good brain. As my cousin, the late Ivan McNab, once said, “this is my pointy-headed cousin, Lillian.” I was always the brain in school and my dad was so proud when I brought home my report card with straight A’s. That brain enabled me to succeed in school, university, and even as a senator, but without knowing who I was, as my mother’s daughter, I was vulnerable to racism and harassment.

During the 1990s there was an economic turndown and funds to support research at the university were cut. I was a research scientist and professor, and the only woman in our group. Though I was in the middle of the pack of our research group, my boss turned on me and said I didn’t need a job because I had a husband. Meanwhile most of my male colleagues, most of whom had spouses who worked outside the home, were not targeted.

My boss tried to get rid of me, basically because he wanted my salary to supplement the supplies budget. I was subjected to veiled threats for years, left out of important meetings, left out of projects, and deserted by my male colleagues. All kinds of efforts were made to decrease my productivity. But it didn’t work.

I was left traumatized by it all and, though I am a strong and resilient woman, I did get totally worn down and turned to the Employment Assistance Program. That was one of two best things I ever did. In the very first counselling session, I realized that the shame of my Cree Indian identity, which I had inherited from my mother, an Indian Residential School survivor, made me vulnerable. It was my big secret. It made me fearful. It made me feel alone.

The second, best thing I did was to go to an Elder recommended by my cousins. There, I began learning spiritual practices. With this new way of being, of being proud of both my Chinese and my Cree roots, I became confident and resilient, and could continue to stand my ground and fight back against unfair treatment.

As I’ve said before, when I had given up all hope, my mom’s spirit came to me and I said to myself: If my mother could do what she did, despite all the racism she faced in her life, then I’d be damned if I’d let some man push me out of my job simply because I’m a woman. I found my inner strength. I could Walk Tall, Walk Proud, Walk Strong.

My mom was Eva McNab from George Gordon First Nation. She died when I was 10 so her life is mostly a mystery to me. She married Yok Leen Quan (aka Happy), a café operator who was 22-23 years older than her, but a handsome fellow and a successful businessman. He was what you could call a “good catch.”

Because she married a non-status man, mom’s Indian status was revoked. But I think that marriage to my dad gave her a good way to get away from the reserve and hide her Cree Indian identity. She was running away from the dismal and oppressive conditions on reserves at the time - poverty, alcohol abuse and sexual abuse. She also was running away from the shame of being an Indian instilled in her at residential school. She couldn’t pretend to be Chinese, but she did pretend to be Scottish (a nod to her great, great, great grandfather, John MacNab.)

Mom had two sisters, Jenny and Carrie. Carrie actually introduced my mom to my dad. Carrie had married a Chinese restauranteur, Charlie Yuen, who ran a café in Paradise Hill. I think my mom waitressed there, before she met and married dad, who ran a café in Livelong.

At that time, Saskatchewan had a law which prohibited Chinese men from hiring white women. This was a way to make it more difficult for them to succeed in businesses like cafés, and was also meant to prevent them from having romantic relationships with white women. Ironically, this racist law provided an opportunity for Indian women to work for Chinese men. Perhaps without that law, my mom wouldn’t have been hired as a waitress in a Chinese café, and thereby meet and marry Happy Quan, and then I wouldn’t exist!

My dad, too, had enormous struggles in his life because of racism.  But he lived up to his nickname, Happy. My mom’s death left him with two youngsters to raise on his own. Hard times and debt left him working as a cook later in life. Sadly, alcoholism led to his passing when he was only 65.

The struggles my parents faced motivate me and give me the inner strength to never give up and to stand up against racism. They would not have believed it possible for their little girl to become a professor or a Canadian senator. The only regret I have is that they did not live long enough to share in my good fortune.

“I have seen, for their dead eyes, the fruits of their labor, I would tell them they can now close their eyes in sleep.”  from Denise Chong, The Concubine’s Children.